Giga Chikadze is confident he won’t just beat Calvin Kattar but will finish him on Saturday.

Chikadze and Kattar are set to headline UFC Vegas 46 at the UFC Apex in a very intriguing matchup. Both men are great strikers, but Chikadze comes from Glory kickboxing so he believes he’s the best striker in the UFC and wants to show that on Saturday night.

“My striking weapons make me one of the most dangerous fighters in the world. When I kick or punch the people, they go down,” Chikadze said on the UFC fight promo. “I’m not only the best striker inside the UFC, (but) I’m the best boxer inside the UFC as well. I’m on my way to becoming UFC champion, I know I have to beat Calvin Kattar first so that is exactly what I am going to do.”

Not only does Giga Chikadze want to show off his striking, but he believes he will be able to be the first person to finish Calvin Kattar in the UFC. He expects the KO to be a spectacular one that guarantees him the title shot. 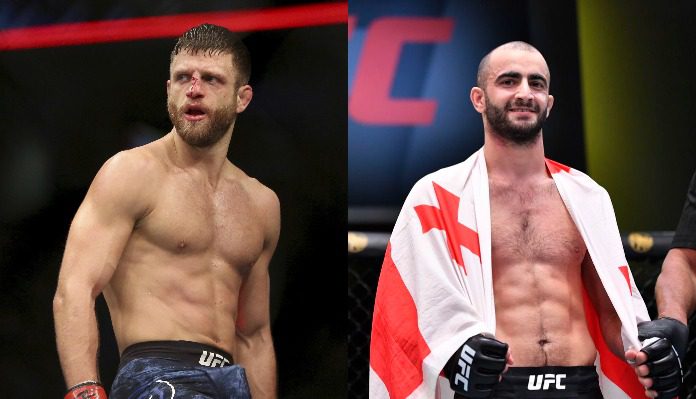 “I know he is going to come strong and prepared, but if Calvin makes one mistake I will make sure to finish him right there,” Chikadze said. “I’m going to finish Calvin Kattar with one of my spectacular knockout techniques. After that, I’m looking for a title shot.”

Giga Chikadze is coming off his first UFC main event where he TKO’d Edson Barboza back in August. Prior to that, he scored a first-round TKO over Cub Swanson which was the biggest win of his career. He’s currently 7-0 as a pro and if he beats Kattar, he could very well be right there for a title shot. However, Korean Zombie is set to challenge Alexander Volkanovski and after that, Max Holloway will likely be next.

Regardless, Chikadze knows what he has to do and if he can get a big finish, it lets people know he is here to stay.

Do you think Giga Chikadze will finish Calvin Kattar at UFC Vegas 46?