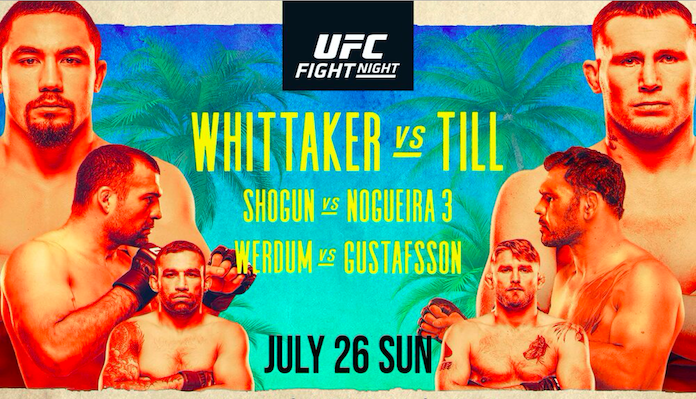 The full betting odds have been released for this Saturday’s UFC on ESPN 14 card, featuring a main event between middleweights Robert Whittaker and Darren Till.

The five-round headliner sees Whittaker and Till fight with a potential middleweight title shot on the line. Whittaker is coming off of a KO loss to Israel Adesanya at UFC 243 last October that saw him lose the UFC middleweight title, while Till defeated Kelvin Gastelum at UFC 244 in November in what was a successful 185lbs debut for the former welterweight title challenger. With so much on the line, this should be a great fight for the fans.

In the co-main event, a pair of legends meet for the third and final time as Mauricio “Shogun” Rua takes on Antonio Rogerio Nogueira. The 38-year-old Shogun is coming off of a draw against Paul Craig while the 44-year-old Nogueira was knocked out by Ryan Spann at UFC 237 last May. These two Brazilian legends have met twice previously in the UFC and in PRIDE, with Shogun winning both of those fights by decision.

Ahead of UFC on ESPN 14, the oddsmakers have released odds for the entire 15-fight card. Check them out below, courtesy of MMAOddsbreaker.com.

In the main event, Whittaker opened as -135 betting favorite, which means you have to bet $135 to win $100. Meanwhile, Till opened as a +115 underdog, meaning a $100 bet would win you $115. This is a difficult fight to predict as both fighters have been very impressive throughout their UFC careers, but only one man can win. It will certainly be interesting to see how this fight plays out and to see who gets their hand raised.

As for the co-main event, Shogun opened as a sizeable -300 favorite with the comeback on Little Nog at +250. Shogun won the first two fights between these legends so it makes sense he’s favored to win again, but you can’t count out Little Nog from pulling off the upset.