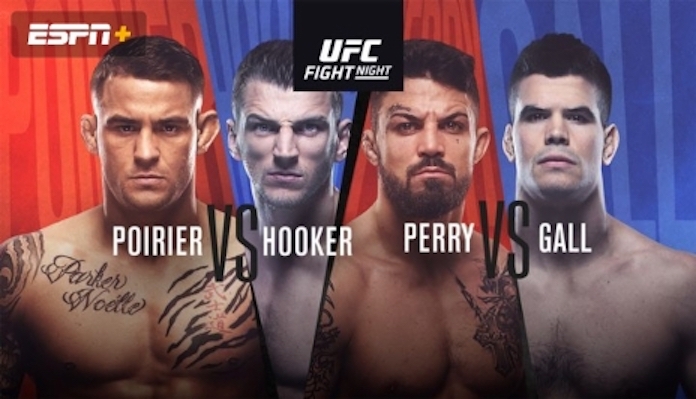 The full betting odds have been released for Saturday night’s UFC on ESPN 12, featuring a main event between lightweights Dustin Poirier and Dan Hooker.

The five-round main event sees Poirier look to bounce back after his loss to Khabib Nurmagomedov at UFC 242, while Hooker will look to add to his three-fight win streak after defeating Paul Felder in his last outing. In the co-main event, a pair of fan-favorite welterweights go at it as the striker Mike Perry takes on the grappler Mickey Gall.

Ahead of UFC on ESPN 12, the oddsmakers opened up the full odds for all 11 bouts scheduled for the card courtesy BestFightOdds.com.

As the UFC on ESPN 12 odds suggest, Poirier opened up as a -165 betting favorite, meaning you would have to bet $165 to win $100. As for Hooker, he opened up as a +135 betting underdog, meaning a $100 bet would win you $135. Despite Hooker coming off of a winning streak, the oddsmakers have pegged Poirier as the small favorite to win the fight given all of his experience and elite wins over the likes of Justin Gaethje. Then again, Hooker has a win over No. 1 welterweight contender Gilbert Burns, so you can’t count him out of this one. It should be a great fight regardless of the result.

In the co-main event at UFC on ESPN 12, two flawed but exciting fighters go at it as Perry takes on Gall. Perry has a mediocre record of just 6-6 in the UFC but he has fought really tough competition throughout his career so you have to look more closely at his record. As for Gall, he’s 5-2 in the UFC but his level of completion is inferior. Given Perry’s striking advantage in the fight and his KO power, it makes sense the oddsmakers favor him here as a -150 favorite, while Gall opened as a +130 underdog.

Overall the UFC on ESPN 12 card looks like another fun event, so take a close look at the odds and see if anything is of interest to you as far as placing a bet goes.

Who do you like for bets considering the UFC on ESPN 12 odds?