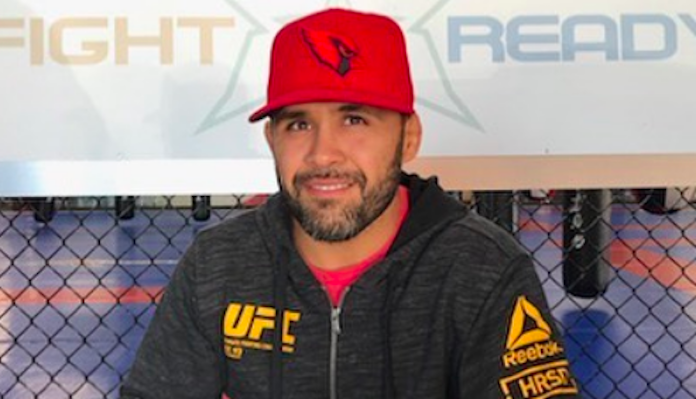 Long-time UFC bantamweight competitor Frankie Saenz is not happy about the circumstances of his most recent loss.

Saenz competed on last Saturday’s UFC on ESPN+ 31 card, taking on Jonathan Martinez. Regrettably, Martinez missed the 136-pound bantamweight limit by a whopping 4.5 pounds—enough of a gap for Saenz to consider rejecting the fight, which would have been within his rights.

In the end, Saenz agreed to fight Martinez at a catchweight, and was knocked out by a flying knee in the first round.

Several days later, in a post to his Facebook page, he opened up on this loss. He explained that he was reluctant to take the fight, but elected to do so because he felt he might be cut if he didn’t.

“There you have it, UFC Fight #10 and #20 in my professional career,” Saenz wrote. “I want to thank everyone for your support. I have the best family, coaches, teammates, friends and fans I could ask for. You have been part of this journey and the motivation that keeps me in the game, but it’s a hard game.

“Last night wasn’t my night and it’s something that doesn’t sit well with me,” Saenz added. “I felt great going in and if you know me, you know I take losses hard but I don’t talk much about it. This time, I feel I need to speak my mind. There’s something to be said when your opponent doesn’t respect the game enough to put in the work upfront and you’re told to take the fight anyway. It put me in a tough position: fight or be cut. I’m not ok with that. Regardless what comes of this, know that I’m grateful for all of you and fortunate I’ve had the opportunity to do what I love. It’s time to go home and be with my kids and reflect on what’s next. Stay tuned.”

The UFC has been somewhat merciless in terms of cuts lately, most recently releasing middleweight fighter Eric Spicely after he was forced out of a fight due a botched weight cut, despite revealing his cutting issues stemmed from an antidepressant prescription.