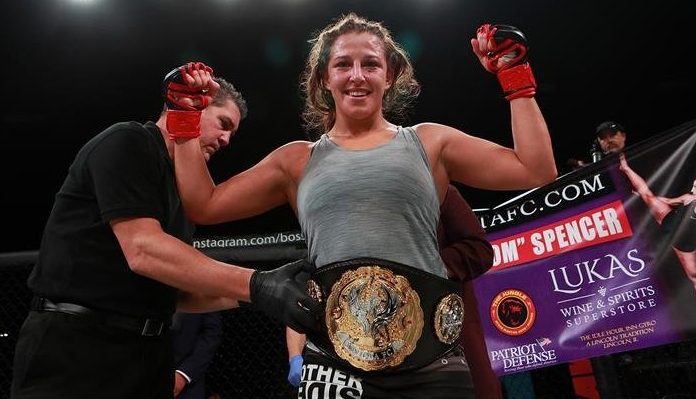 Over this past weekend, it was confirmed that the Invicta FC featherweight champion Felicia Spencer is officially on her way to the UFC.

There is significance in the signing for obvious reasons, b as of the UFC featherweight division’s creation in February 2017, the promotion has only homed two natural 145-pound fighters since then in the former champion, Cris Cyborg, and Megan Anderson.

Spencer will now act as the third fighter to join that group.

Along with Spencer is expected to be several other signings to the division who have yet to be revealed, but the now former Invicta champ is clearly the most impactful.

“This has always been the dream,” Spencer told The Body Lock. “When I first started training there wasn’t an Invicta, there weren’t women in the UFC. Invicta became the place to go and that was my dream, so it was amazing enough to even win that Tuff-N-Uff contract to fight for Invicta and as the division built it was always on the horizon and I have been chasing that horizon my whole career.

“It feels right but I wasn’t expecting it next. I was lucky to be in the position that I was. I owe it all to Invicta really for allowing me to build a platform.”

Spencer has fought the entirety of her six-fight professional career within the Invicta FC cage and she’s been flawless doing so with no blemishes on her record.

After watching season 28 of The Ultimate Fighter unfold, it left a bad taste in most of the community’s mouth as all of the contestants that have been kept have dropped from featherweight down to bantamweight.

Albeit that’s only two fighters in Leah Letson and the season’s winner, Macy Chiasson. But another contestant in the 27-year-old Bea Malecki has just been signed as well and is also expected to drop down.

Spencer, however, has no intentions of doing so assuming that she even could.

“It’s small, but I know they are signing a few featherweights right now. It sounds like they are trying to develop it. I know people have changed divisions but I’m here for featherweight and I’m here to build the division. I see a big future for it. This is a big opportunity for me.”

The former champion doesn’t have her official UFC debut scheduled just yet but she’s looking at sometime in the Summer.