Drew Dober is on an impressive run of form. The American has won his last three on the bounce with all of those victories coming via stoppage. In fact, his last six wins have all been finishes.

Dober’s last loss came against Brad Ridell last year as he dropped a unanimous decision – but still walked away with a bonus for Fight of the Night. Prior to that, the Bellator veteran was submitted by the champion, Islam Makhachev.

Having gained first-hand knowledge of being in the cage with the Dagestani, Dober knows him better than most. In a recent interview with James Lynch, the 34-year-old was asked who else in the division he thinks would be a problem for the champ, to which he replied.

“I think Dustin Poirier could give him some problems. That would be a close fight. Really, the fight IQ in that fight would be the winning factor.”

Makhachev won the belt in convincing fashion at UFC 280 when he submitted Charles Oliveira in the second round. The win was a huge statement for the Russian, as ‘Do Bronx’ has racked up more finishes (19) than anyone in the history of the UFC. Some of those finishes came against some of the division’s biggest killers – including Poirier.

Makhachev will make his first title defence against Alex Volkanovski at UFC 284 in Perth. Poirier sits at #2 in the division having submitted Michael Chandler at UFC 281. ‘The Diamond’ has come up short on two previous occasions when competing for the title, but given his status at 155 lb he could be in for a shot at Makhachev’s crown sooner or later. Dober meanwhile, is looking to launch himself into contention having tied Poirier’s record for most lightweight knockouts with eight. 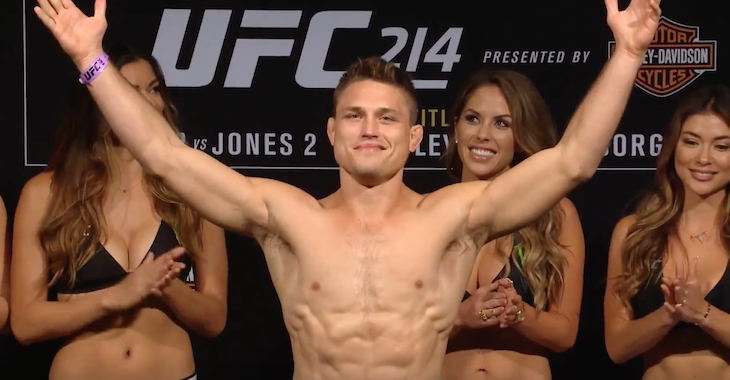 Having expressed an interest in fighting Poirier himself due to the respect he says he has for the Louisiana-native, Dober also wants to fight Chandler. ‘Iron’ is currently courting a bout with Conor McGregor, but Dober has thrown his hat in the ring to go toe-to-toe with Chandler if that doesn’t come to pass. Despite being separated by nine places in the rankings, it’s still a feasible match-up. Chandler is known for being one of the gamest individuals in the sport – and also for being involved in barn-burners.

Is Dober vs Chandler a fight you’d want to see, and do you think Poirier would be a problem for Makhachev?

This article appeared first on BJPENN.COM
Previous articleDillon Danis says he has to pay Bellator “a hefty fee” to be allowed to box KSI
Next articleShogun Rua confirms UFC 283 will be his “farewell” fight: “I know it’s time to stop”
© Newspaper WordPress Theme by TagDiv