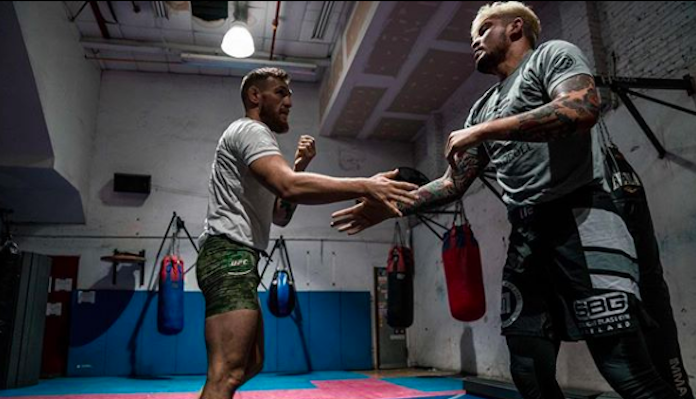 Conor McGregor is days out from a welterweight scrap with Donald “Cowboy” Cerrone. While McGregor is currently the betting favorite in this matchup, some fans suspect Cowboy’s submission skills could spell disaster for the Irishman. Dillon Danis disagrees.

Danis, who is a decorated BJJ blackbelt, has served as one of McGregor’s key training partners for the last few years.

He claims that McGregor has always had an underrated ground game, and believes that’s truer than ever today.

“Conor’s always been prepared, man,” Danis told The Schmo on Wednesday (via MMA Junkie). “Conor’s been one of the best jiu-jitsu guys that I’ve ever rolled with, like MMA-wise since I started training with him. His jiu-jitsu is on another level, and it always has been.

“I think people just underestimate him for some reason, but if it does go to the ground, they’ll see,” Danis added. “They’ll see how good he is.”

While this endorsement from Danis is likely to reassure some of McGregor’s doubters, it doesn’t change the fact that all four of McGregor’s professional losses have come by way of submission. Cerrone, on the other hand, has finished a whopping 17 of his 36 wins with his jiu-jitsu.

McGregor has not fought since October of 2018, when he was submitted by Khabib Nurmagomedov in a bid to reclaim the UFC lightweight title. His next most recent fight before that was a blockbuster boxing match with undefeated legend Floyd Mayweather Jr., while his second most recent MMA fight occurred all the way back in 2016, when he knocked out Eddie Alvarez to claim the lightweight belt. Because he still held the UFC featherweight belt at the time, this made him the first fighter in UFC history to hold titles in two weight classes simultaneously. He’s 21-4 in MMA competition.

How do you think Conor McGregor will do if his fight with Cowboy hits the mat?