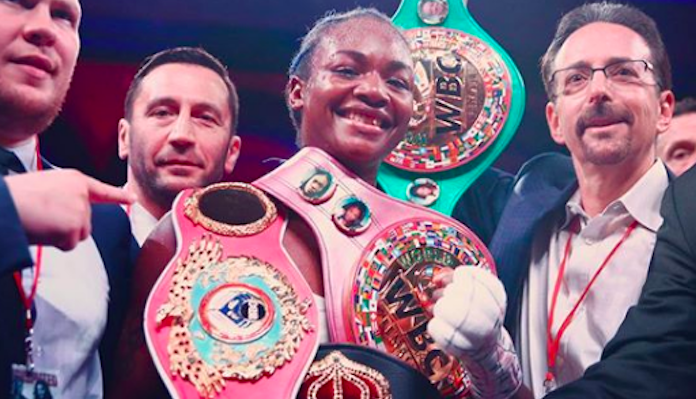 Claressa Shields is looking to make history on Jan. 10 when she battles Ivana Habazin for the vacant WBC and WBO light middleweight titles. Should she win, the two-time Olympic gold medalist would become a three-weight world champion.

Not only would Shields become a three-weight world champion like Canelo Alvarez, Vasyl Lomachenko, Bud Crawford, Floyd Mayweather, and Manny Pacquiao among others, but she would be the fastest to do so. This is only Shields’ 10th professional fight.

So, for her promoter Dmitriy Salita, the fight is very important.

“It is extremely important. If she is victorious, she will become the fastest person in the sport to win three divisional titles. This is a very big step for Claressa and a big step for women’s boxing,” Salita said to BJPENN.com. “Claressa has a tough fight in front of her, the third time the fight has been scheduled to happen and Jan. 10 will be very exciting.”

The Habazin fight, as Salita mentions, has been scheduled two times in the past but an altercation at the weigh-ins last time out postponed it. Although it has been canceled twice, Salita and Claressa Shields made it clear, this was the fight they wanted.

“Claressa wanted to make history and fight for the third world title and Ivana is the mandatory challenger. Usually, in boxing, champions go up in weight but Claressa is going down,” he explained. “She is going down to 154, which is really challenging, she won a gold medal at 165 pounds so making weight may be a challenge.”

Shields decided to go down in weight to try and become a three-weight world champion because doing so will solidify her as the best.

“Claressa only wants to fight the best. She has always wanted to make history and always push the limits. The way to do that is to go down in weight. There is more talent the lower in weight you go so Claressa is making that sacrifice,” Salita said. “She is carrying the sport of women’s boxing on her shoulders. That is what pushed her to go down in weight and continue to make history.”

In the end, Claressa Shields and her promoter are confident the Olympian will get her hand raised and become a three-weight world champion. After that, they have talked about fighting Amanda Nunes, but for now, the focus is on Habazin.

“When they were supposed to fight, I saw Ivana at the public workouts and she was very sharp and the best that I’ve seen her. Claressa has a tremendous amount of experience, but this Ivana’s moment to shine and cement herself. When you have somebody that is determined to make history herself, that should make for a good fight,” he said of how the fight will play out. “Claressa is the favorite, but Ivana is a very good challenger. Ivana has said she is coming to win so it will make it interesting beginning to end.”

What do you make of the promoter saying Claressa Shields is carrying women’s boxing on her shoulders in fight against Ivana Habazin?