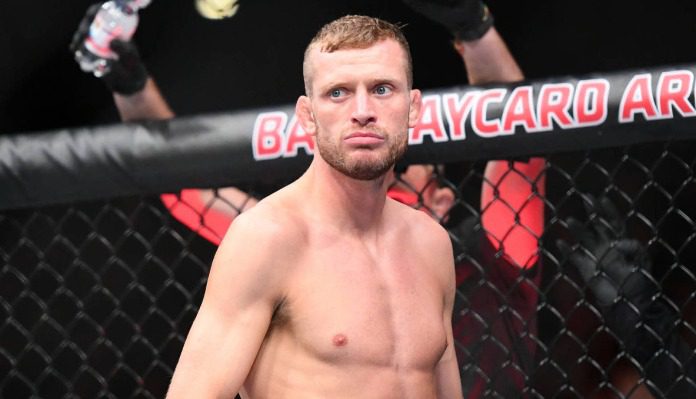 Davey Grant knows the pressure is on him to get back into the win column at UFC Vegas 54.

Grant is coming off a split decision loss to Adrian Yanez and a decision loss to Marlon Vera in two entertaining fights. He’s finally set to return against Louis Smolka at UFC Vegas 54 on Saturday and it’s a matchup he thinks is a favorable one for him.

“I think I match up well against anyone in the division,” Grant said on Just Scrap Radio on BJPENN.com. “I’m a hard guy to fight, I’ve got good striking, good wrestling, good wrestling defense, but a fight is a fight. Like I say, I’m a real hard fight for anyone and I think me and Smolka match up well for an exciting fight, it’s going to be a good one to watch.”

Part of the reason why Grant believes this is a favorable matchup for him is due to the fact Smolka was knocked out in his last fight. However, he knows he can’t read too much into that as every fight is different.

“There is no compliancy at all. I believe everybody can get knocked out anyway and I’ll try to go in there and knock someone out anyway,” Grant said. “Whether or not he got knocked out in his last fight or has never been knocked out, I’m still going to look for it.”

As Davey Grant says, in every fight, he goes into it believing he will get the knockout and this fight against Louis Smolka at UFC Vegas 54 is no different.

However, if Grant doesn’t get the stoppage win he wants, he still believes this will be a very fun fight for the fans to watch.

“I’m always going out to finish the fight as early as possible, that is always the goal,” Grant explained. “I’m prepared, I always say we go for the quick knockout but we got to respect the war, anything less than a war is a bonus. I’m always prepared to take it into deep waters if needed.”

If Grant gets his hand raised, he isn’t sure where that will put him in the division but he does want to get on the UFC London card on July 23.

“Hopefully it propels me back up there. I want to start taking out top-15 guys, that’s the goal whether or not I get one after this I don’t know. I’m not looking too far past it but I’m just taking each fight as it comes and go in there and get the job done as early as possible… That would be great if I can get on the London card, I don’t take any days off and just get right back into camp. That would be really good, it’s been a long time since I’ve fought in London,” Grant concluded.

Do you think Davey Grant will finish Louis Smolka at UFC Vegas 54?