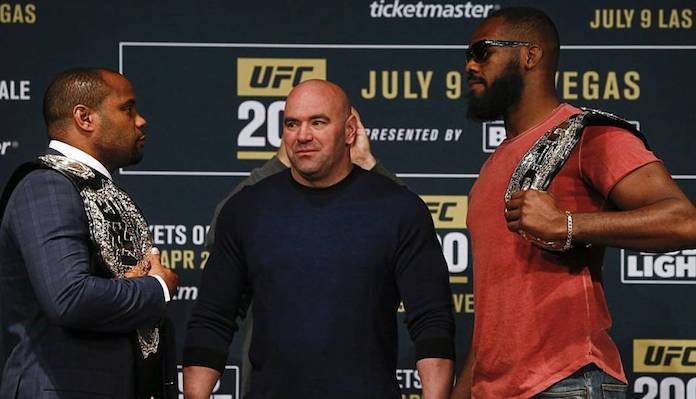 UFC champions Daniel Cormier and Jon Jones have arguably the biggest rivalry in the history of mixed martial arts.

Despite a clear dislike for “Bones” as a person, current UFC heavyweight champion Daniel Cormier has nothing but respect for his talents as a fighter.

Jon Jones and Daniel Cormier have met twice in the past, with “Bones” emerging victorious in both of those contests.

In their second meeting at UFC 214, Jones finished “DC” via third-round knockout after connecting with a beautiful head kick.

However, that victory was later overturned to a no-contest, this after Jones was flagged by USADA for having trace amounts of the anabolic steroid turinabol in his system.

After serving his suspension, Jon Jones returned to action at last month’s UFC 232 event in Los Angeles where he defeated Alexander Gustafsson via third-round knockout to capture the promotions vacant light heavyweight title.

Daniel Cormier sat down with Luke Thomas on The MMA Hour where he discussed Jon Jones impressive win over “The Mauler”.

“Anytime you can go through a guy like Alexander Gustafsson in the fashion that he did is very impressive,” Cormier said of Jones on Monday’s edition of The MMA Hour. “I have never shied away from the fact that the guy’s a phenomenal mixed martial artist, and I thought he fought well. I thought he fought well, he fought exactly as he intended to and was able to completely shut down Alex.”

While it remains unclear if a highly anticipated trilogy bout between Jon Jones and Daniel Cormier will ever come to fruition, there is no doubt that their respective careers will forever be linked.

While Jones career has been marred in controversy over recent years, “DC” believes that his bitter rival would have been able to find similar success without the use of banned substances.

“If you’re asking me if I feel Jon Jones would’ve worn a UFC title without any of these things (PEDs), I do, 100 percent, believe he would’ve won a UFC title,” Cormier said. “I think that he’s a very talented guy. He comes from the sport of wrestling, so he has that baseline for dictating where fights take place. With that being said, those things are done for a reason, right? You don’t have all these issues with the testing unless you have either doubts or something in your preparation over the course of your athletic career didn’t truly add up. That’s the only way you would get these types of things tied to your career.”

“But do I feel the guy would’ve been successful without it? Yes, I do. I think he definitely would’ve been a UFC champion, and even without all this stuff that’s tied to the fights, I think he could’ve won those fights to me anyways. I think he’s a very talented guy. And I still believe I could beat the guy, even though I’ve lost a couple times, but again, I think that’s what makes me different, is that regardless of — every time I walked on that mat against Cael Sanderson, losing every time, I still felt that every time I went out there: ‘This is the one I’m going to win.’ I never didn’t give myself a chance, and that’s how I feel with Jones.”

Do you think we will see a third and final fight between bitter rivals Jon Jones and Daniel Cormier? Sound off in the comments section PENN Nation!