UFC president Dana White revealed he bet $100,000 on Canelo Alvarez to knock out Caleb Plant, winning over $41,000 when he got the job done.

Alvarez fought Plant in Las Vegas on Saturday night, and on the other side of the country, UFC 268 took place in New York City. While White was busy overseeing UFC 268 and sitting cageside during the event, he also had the Alvarez vs. Plant fight on his monitor in front of his desk outside of the Octagon. The reason he was so interested in the Alvarez vs. Plant fight? While White is a massive boxing fan, it wasn’t just because he was so interested in watching the fight, but also because he had a $100,000 bet on Alvarez. 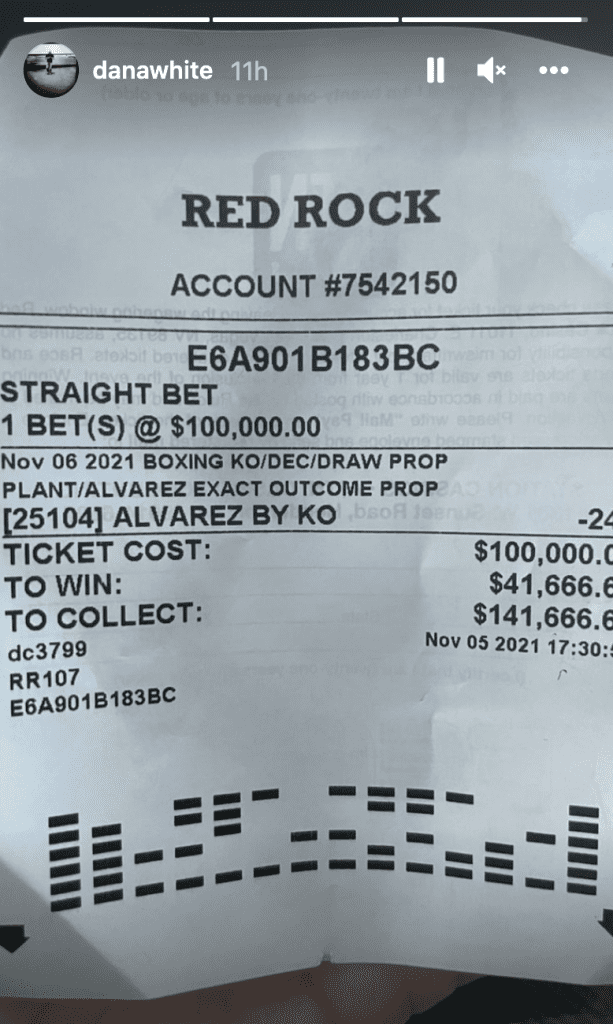 White can’t bet on UFC fights since he promotes the events, so he has to bet on boxing and other sports to get his fix. We know that White is a massive boxing fan and that he often bets big amounts of cash on boxing matches, but it was nice to see him be transparent and actually release his bet slip after the fight so everyone could see it.

There was another connection between White and Alvarez, as UFC welterweight champion Kamaru Usman said this week that he wants to fight Alvarez next. Speaking to the media following UFC 268, White said that he didn’t think that would be a good idea. As far as White goes, Usman is the best in MMA right now and Alvarez is the best at boxing, and he wants things to stay that way.

What do you think about Dana White placing a $100,000 bet on Canelo Alvarez and winning it when he knocked out Caleb Plant in the 11th round?