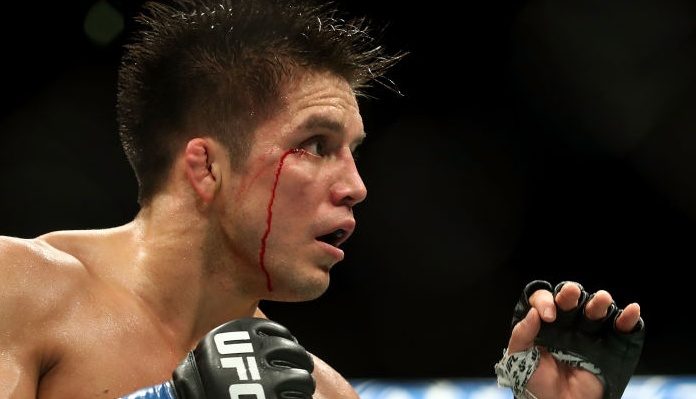 Cejudo, who previously held the UFC bantamweight and featherweight straps, retired last month after a TKO victory over Dominick Cruz.

While his retirement does no appear to have been a bluff, Cejudo has conceded that he’d return to action for the right opportunities, such as a boxing match with Ryan Garcia or a featherweight title fight with reigning champion Alexander Volkanovski.

“I’ve done everything in MMA,” Cejudo told TMZ recently. “I’m satisfied with my career. There would only be one fight that would really bring me back, that would really wake me up in the morning. That’s against other than Ryan Garcia, that would be Alexander Volkanovski, that overgrown midget… I would love to make him bend the knee. He’s already halfway there.

“I want a third title because I want to be different,” Cejudo added. “There’s a lot of champ-champs. Obviously, there’s only one ‘Triple C.’ There’s only one Olympic champ, flyweight champ, bantamweight champion of the world but it’s just to cement it and go in the history books as the greatest mixed martial artist of all-time.”

Fight of the year candidate. Beautiful to see these two artists go to work in MY weight class #UFCVegas3

“Fight of the year candidate. Beautiful to see these two artists go to work in MY weight class,” Cejudo wrote.

This remark from Cejudo prompted a reporter to ask White about the former two-division champ returning for a featherweight title fight. The UFC boss was not interested in that idea, reiterating that Cejudo is, in fact, retired.

“He’s retired,” White said (h/t MMA Fighting). “I just did another interview where people are asking me about other retired guys. These guys are retired. I’m not even thinking about any of those guys. They’re retired. There are so many kids right now that are here, that want to fight. Those are the people that I’m focused on.”

Do you think we’ll ever see the former two division champion Henry Cejudo back in the Octagon? Let us know your thoughts in the comments section.