Rountree (9-5 MMA) squared off with Bukauskas (11-5 MMA) on the main card of last weekend’s UFC Vegas 36 event. The result was a second round TKO victory for ‘The War Horse’, who destroyed the knee of Modestas with a nasty oblique kick.

Immediately following the contest a number of UFC fighters took to social media where they called for the banning of the knee-shredding strike. Former UFC welterweight title challenger Dan Hardy was not among the protestors and instead believes oblique kicks are an effective technique.

“It shouldn’t be banned,” Hardy told Submission Radio (transcription via Denis Shkuratov). “It’s an effective technique. If we start banning effective techniques, then we’re going to find ourselves with a very, very limited rule set. I think that we need to recognize that it’s an occupational hazard. On football fields, rugby pitches, up and down, around the world on a weekend basis, people are getting their knees destroyed in the same way that Modestas did. It happens very rarely in MMA. Anybody that says it should be banned, have them name three people that it’s happened to, because it’s very difficult to recall any time when it actually happens in MMA.” 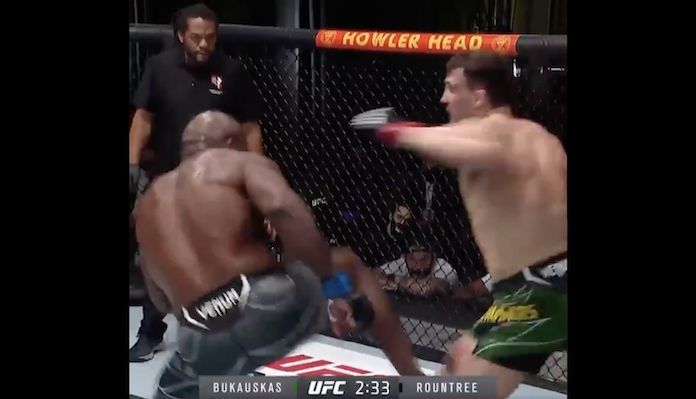 “It’s the same as knees to the head on the ground as well. For every now and then when they do land, there’s so many times when they don’t. It’s one of those techniques that’s very difficult to land. It’s more beneficial to throw it earlier in the fight when the leg’s a bit dryer and those kind of things, but it’s such a difficult thing to land in the first place, if you can stop a fight with it, then well done. I have no problem with it.”

Dan Hardy believes fighters are made well aware of risks, claiming that ‘death waivers’ are required to be signed prior to competition.

“We say it all the time, it’s not a tickling contest. You’re trying to take each other out. A knee injury is the least of your worries in there when you’ve got people throwing elbows and knees and spinning kicks at your head. Like, don’t complain about fighter safety and talk about knee injuries, cause people from all over sports that suffer knee injuries all the time are not complaining. It’s a silly thing to talk about.”

“I can’t even believe that it’s been brought up as something that we should consider banning. It fries my brain. Honestly, it does. And the fact that professional fighters would come out and say it, you’re in the wrong sport. You’re doing the wrong thing if you’re concerned about picking up a knee injury. You know what you’re doing when you get in there. You sign a death waiver when you’re stepping in there to fight. Suck it up.”

Do you agree with Dan Hardy that oblique kicks are an effective technique in MMA and the notion of banning the strike is silly? Share your thoughts in the comment section PENN Nation!