Conor McGregor says he would have finished Nate Diaz in their first fight if he hadn’t chose to refrain from unleashing a “horribly nasty” kick.

McGregor and Diaz first met in March of 2016, when Diaz stepped in on 11 days’ notice to replace the Irishman’s originally slated opponent Rafael dos Anjos, who was then the UFC lightweight champion.

McGregor started strong in this short-notice fight, but he slowly began to fade, and was ultimately choked out by Diaz in the second round.

In a recent post to his Instagram story, McGregor looked back on a moment in the fight when he threw an oblique kick, but decided not to commit to it at the last minute because it “felt too nasty.”

He claims that if he hadn’t pulled back on the move, he would have “snapped” Diaz’s leg and forced the end of the fight. 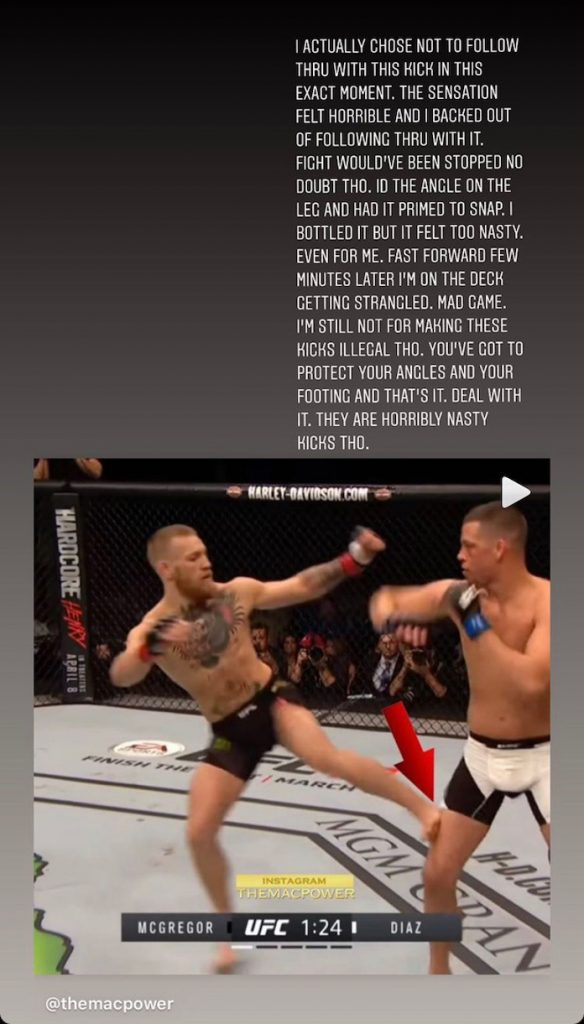 “I actually chose not to follow through with this kick in this exact moment,” McGregor wrote. “The sensation felt horrible and I backed out of following through with it. Fight would have been stopped no doubt though. I [had] the angle on the leg and had it primed to snap. I bottled it but it felt too nasty. Even for me. Fast forward a few minutes later and I’m on the deck getting strangled. Mad game.”

While McGregor’s claim that he could have finished Diaz with this kick will certainly stir up some debate, there’s no denying that oblique kicks can be tremendously damaging when they land at full impact. In fact, some fans and pundits have called for the kicks to be banned.

Despite deeming the move “nasty” McGregor does not share that opinion, and feels the kick should be legal in competition.

“I’m still not for making these kicks illegal though,” he wrote. “You’ve got to protect your [ankles] and your footing and that’s it. Deal with it. They are horribly nasty kicks though.”

After his first fight with Diaz, Conor McGregor got a shot at redemption in an immediate rematch. He won the fight by majority decision.

Earlier this year, he announced his retirement from MMA.