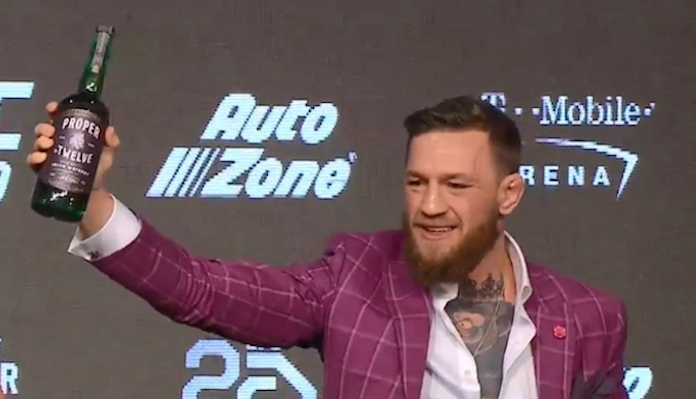 This morning, The Irish Times reported that Proper No. Twelve, the Irish whiskey brand founded by former UFC lightweight and featherweight champ Conor McGregor, has already had a major affect on the larger Irish whiskey industry.

Proper No. Twelve “sold out a six-month allocation in its first 10 days and has now shipped about 200,000 nine-litre cases since its launch,” the Irish Times report read.

“Jameson, which has led the Irish whiskey renaissance, is seeing a slowdown in growth in the US with analysts attributing it in part to the launch of Conor McGregor’s Proper No. Twelve brand last year,” the report continued.

Unsurprisingly, it did not take long for Conor McGregor to react to this favorable headline.

“Was there ever any doubt I’d turn Whiskey to a Billi? I turned “human cock fighting” to 4.2. I’m gonna toast on this fine Thursday this amazing news. Sláinte to the only true Irish Whiskey we have left, @ProperWhiskey! Irish owned forever. Thank you all. It has been my pleasure.” – Conor McGregor on Twitter.

Have you tried Conor McGregor’s Proper No. Twelve Irish whiskey yet? What do you think of it?