Conor McGregor is back to the old tweet and delete trick after taking a shot at Islam Makhachev earlier this week.

One thing we know to be true about Conor McGregor is that he’s pretty good at getting under people’s skin – and that he also seems to enjoy it quite a bit. The Irishman tends to come out with some random stuff on social media from time to time and more often than not, it’s concentrated on some of his rivals in the mixed martial arts world.

We all know he had an extensive rivalry with Khabib Nurmagomedov once upon a time and in the midst of all that, he also got into a fairly notable feud with other members of his family at UFC 229.

Conor isn’t the biggest fan of Islam Makhachev and in the following tweet that has since been deleted, he took aim at the 155-pounder in a pretty crude way. 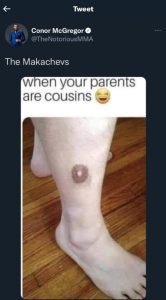 In two months at UFC 280, there’s a good chance Islam Makhachev will be the one laughing as he prepares to try and capture the UFC lightweight championship. He’ll be taking on Charles Oliveira in what has the potential to be an incredibly fun match-up, and if Conor does fancy going after another title down the line, it makes a lot of sense for him to pursue Islam given the history between them and Khabib.

For now, though, fans will continue to sit back and watch as McGregor does whatever he can to stick it to those in MMA that he feels have wronged him.

What did you think about Conor McGregor’s latest shot on Twitter? Can you picture a scenario in which he fights Islam Makhachev in the future? When will he return to the Octagon? Let us know your thoughts down in the comments, BJPENN Nation!

This article appeared first on BJPENN.COM
- Advertisement -
Previous articleSean O’Malley says he’s “okay with losing” to Petr Yan at UFC 280 because he knows he’s “gonna be a world champ someday”
Next articleAljamain Sterling explains why he feels like “the red-headed step-child” when dealing with certain UFC officials