There are currently no plans for a sequel to the 2007 comedy Superbad, but if the film is ever revisited, Conor McGregor has some plot ideas.

The former two-division UFC champ chimed in on the topic on Instagram recently after a fan suggested he’s starting to look a bit like Superbad star and writer Seth Rogen. 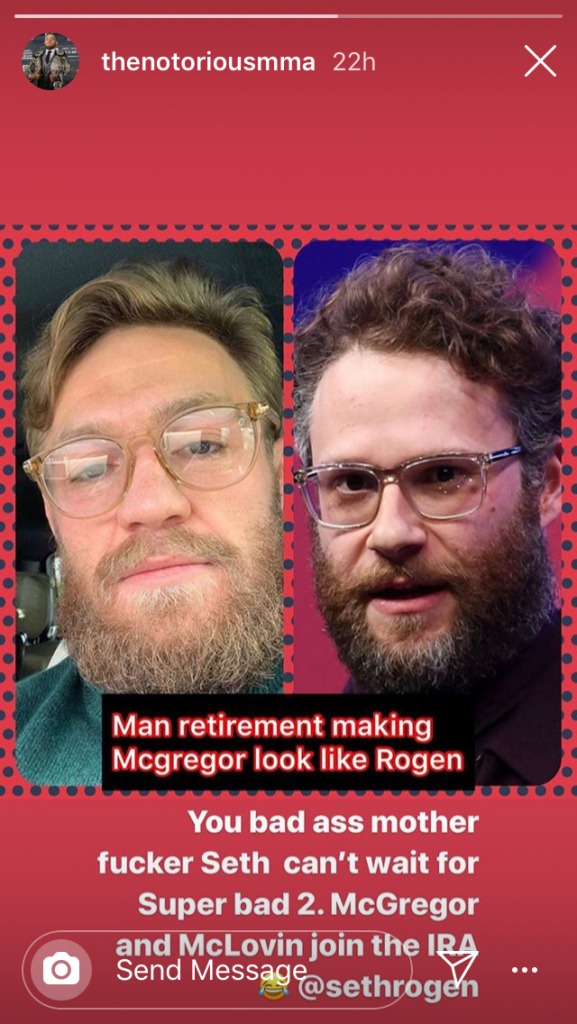 So there you have it. If Superbad gets a sequel, McGregor wants in, and he wants his character and the beloved character McLovin (Christopher Mintz-Plasse) to join the Irish Republican Army.

Superbad, for those who haven’t seen it, is about two friends who are trying to lose their virginities before they go college. McLovin is a secondary character, but far and away the most memorable character in the movie.

Conor McGregor has not fought since late 2018, when he was submitted by the undefeated Khabib Nurmagomedov in a failed bid to capture the UFC middleweight title. Since then, the Irish star has been teasing a comeback, although there hasn’t been much in the way of movement toward that end.

Over the last few weeks, McGregor has been called out by top lightweight contenders Dustin Poirier and Justin Gaethje. He’s also been linked to a fight with former UFC lightweight champion Frankie Edgar. Edgar is plotting a move all the way down to bantamweight but has said he’d delay those plans for a lightweight fight with the Irishman.