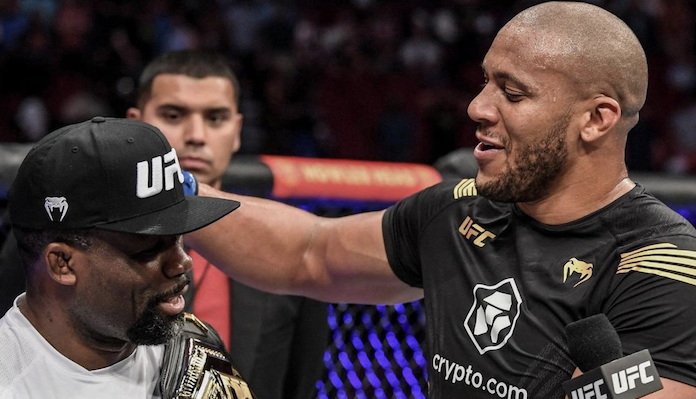 The rivalry between Ciryl Gane and Francis Ngannou has only grown over the past few weeks in the lead-up to their title fight at UFC 270.

Gane and Ngannou used to train together under Fernand Lopez in France, but ‘The Predator’ and Lopez had a major falling out which forced the heavyweight champ to change gyms. Now, given they are about to fight on January 22, sparring footage was leaked of the two training with one another.

Although the sparring footage didn’t show much, it did show that Gane was much faster and piecing Ngannou up. However, there is more to the video and that is the Frenchman dropping the champ, Lopez reveals.

“If we changed the speed of either guy, then we would’ve manipulated it. There’s no doubt that was Francis Ngannou,” Lopez said to LowKick MMA about Gane-Ngannou sparring footage. “But, that footage didn’t tell the whole story of what happened in training. There were so many opportunities where they got the better of each other in sparring. So could’ve we manipulated it?

“He didn’t want me to release the whole footage because in that specific training, Francis Ngannou ate a knee shot to the liver and got dropped,” Lopez continued about Gane-Ngannou. “Stopped the whole training. These are facts. Francis was on his backside. If he’s saying this isn’t true, I’ll release the whole footage. But, my content manager didn’t want to release it because we have a privacy in the gym. When guys train in your gym, they expect things to stay in the gym.”

Although Fernand Lopez claims Ciryl Gane dropped Francis Ngannou in sparing, it’s uncertain if it is true due to the fact that the video has not been released. Even if it is true, it’s hard to take too much from it as sparring and an actual fight are different, and both men have improved greatly since that time.

Regardless, Ngannou and Gane get to settle their differences on January 22 in the main event of UFC 270 which will determine who the best heavyweight is.

What do you make of Fernand Lopez claiming Ciryl Gane dropped Francis Ngannou in sparring?