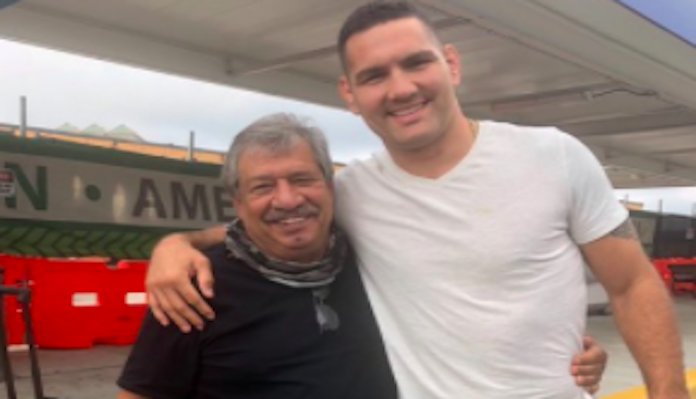 Former UFC middleweight champion Chris Weidman revealed this father-in-law recently passed away, and the family is asking fans to help.

According to his obituary, Vincent John Pecora passed away on February 17 at the age of 70 years old. His daughter, Marivi, is married to Weidman. In a lengthy statement posted on his Instagram, Weidman revealed that his father-in-law tragically died after he was hit by a truck in an intersection while crossing the street. Weidman said he knew the man since he was in the seventh grade when he met his daughter and future wife at a wrestling camp. Pecora became a huge part of Weidman’s life and one of his biggest supporters.

The family has also asked for fans to help out with the GoFundMe for the Vincent J. Pecora Jr. Wrestling Scholarship. The fund is set up to help young wrestlers with their education.

“The last few weeks have been very tough for my family and me as my father-in-law got hit by a car and was in critical condition fighting for his life until his body eventuallyc gave out after five days. Vinny, like he’s done daily for 10+ years, was crossing the street heading to our gym to say hello and show support when he realized he forgot his mask; he made a quick turn to head back to his car and got struck by a truck. Complete accident but downright tragic. For five days, he fought a battle and eventually it became too much. Pops has been in my life since 7th grade, which happens to be the same day I met his daughter and ultimately my wife-to-be. It was my first wrestling camp, Granby camp in Virginia. I didn’t know at the time, but he would end up being a massive part of my life. Most of the offseason tournaments and camps, it was Pops that was driving us. He came to all my wrestling matches from Junior high to college. Pops never missed one of my fights as he became an integral part of my life,” Chris Weidman wrote.

“If you spoke to him, there was one of 3 things you probably discussed: Vietnam, Wrestling, and Mixed Martial Arts (since I started fighting). Pops was more of a quiet guy until it was time to talk about any of these. When that time came, it could go on for hours. He would always ask if I was tired of him chewing my ears off and my response was always no and never. Pops would tell me how much he appreciated me listening and paying attention to him. He would say to me, and others,that I always listened to him when it came to his stories from an early age. I was proud of that. Vinny came off as very rough around the edges and maybe even a little scary , but upon meeting him and talking to him, he would become your biggest fan. Pops had his highs and lows in his life, and even in his lowest, he never projected that or showed any jealousy towards anyone. He wanted the best for people in life although he did view the youth as the future hence why he gravitated to youth wrestling. He loved wrestling because of the life values and lessons it instilled in kids. He was a man who lived and died by his word. If he told you something…”

We here at BJPenn.com wish Chris Weidman and the rest of the Weidman and Pecora families our deepest sympathies during this very difficult time.