Weidman (14-5 MMA) entered tonight’s event headliner looking to rebound this after suffering a knockout loss to Ronaldo “Jacare” Souza in his most recent effort at UFC 230.

Unfortunately for ‘The All American’, the move up to 205-pounds did not go as planned.

After a decent opening minute, in which Chris Weidman was able to take Dominick Reyes to the canvas, things quickly went wrong when the undefeated contender got back to his feet. 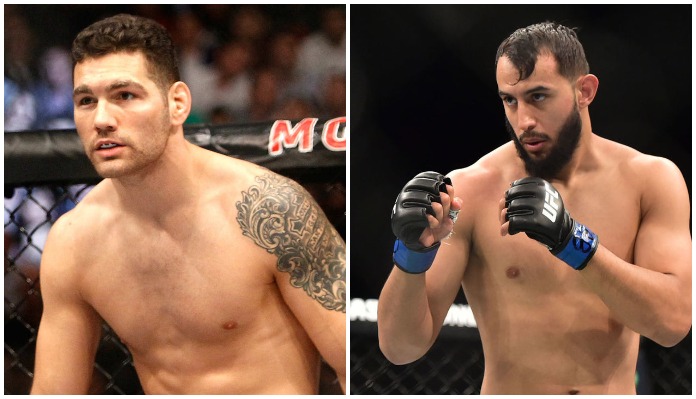 Reyes was able to drop Weidman with a massive punch and then quickly pounced on the former middleweight kingpin with hammer fists.

Those ground and pound strikes eventually put Weidman out cold, prompting the referee to mercifully step in and stop the contest.

The loss marked Weidman’s fifth in his past six fights, with all of those losses coming by way of knockout.

Weidman’s lone win in his last six fights came against Kelvin Gastelum in 2017, who he submitted at UFC Uniondale.

“This is the game we play. I’ll be back better.”@ChrisWeidman is down, but not out #UFCBoston pic.twitter.com/UdRPOyp8s8

“Well props to Dom Reyes. Thanks you guys, to everyone for coming out. Everyone that came here to support me I apologize I didn’t get the W. It’s the game we play. I’ll be back better. God is good, even in this adversity. He’s good. All good.”

Who would you like to see former UFC middleweight champion Chris Weidman fight next following tonight’s KO loss to Dominick Reyes at UFC Boston? Sound off in the comments section PENN Nation!