Charles Oliveira says poor eyesight is no longer an issue ahead of UFC 280: “I had the surgery, and my eyes are 100 percent perfect”

Charles Oliveira says his poor eyesight is no longer an issue ahead of UFC 280 after undergoing successful vision correction surgery.

Oliveira (33-8 MMA) will be looking to reclaim the UFC’s lightweight title when he takes to the Octagon against Islam Makhachev (22-1 MMA) tomorrow in Abu Dhabi. ‘Do Bronx’ was most recently seen in action at May’s UFC 274 event, where he extended his current win streak to eleven in a row with a first-round submission victory over Justin Gaethje (see that here). However, because he missed weight by half a pound, Oliveira was forced to vacate the title and was ineligible to take it home despite defeating ‘The Highlight’ that evening in Phoenix.

Making Charles Oliveira’s current win streak all that more impressive is the fact that ‘Do Bronx’ has been competing nearly blind inside of the Octagon.

“I see three [faces]. If I hit the middle one, that’s fine,” Oliveira told Flow podcast following his submission win over Dustin Poirier at UFC 269. “I think keep this same technique. Three guys for me, is perfect. If I hit the one in the middle, it’s good. I’ll tell you the truth, I’m a guy who has a lot of faith in God and it’s no joke. If I take my glasses off, I only see 50 per cent but it never hindered me in a fight.” 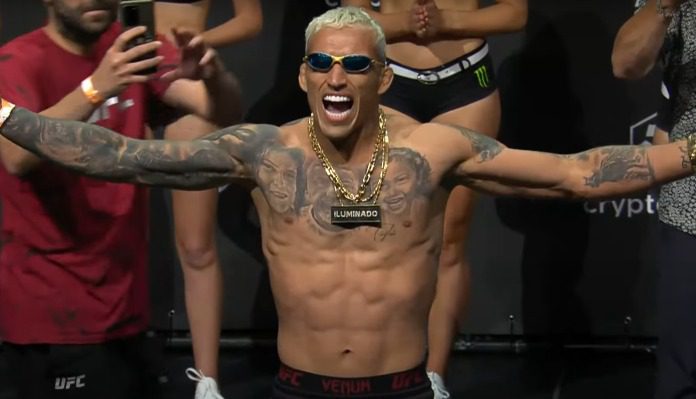 Now, ahead of UFC 280, Charles Oliveira says he will be sporting perfect vision in his fight with Islam Makhachev, this after undergoing successful vision correction surgery.

“I had the surgery, and my eyes are 100 percent perfect,” Oliveira told SI while speaking through a translator. “I can see everything now.”

Now armed with perfect vision, ‘Do Bronx’ is confident he will be able to dispose of Makhachev in the very first round.

“I’m going to knock Islam out in the first round. Then we’re going to celebrate.”

What do you think of the news that Charles Oliveira will be sporting perfect vision in his lightweight title fight with Islam Makhachev at UFC 280? Share your thoughts in the comment section PENN Nation!