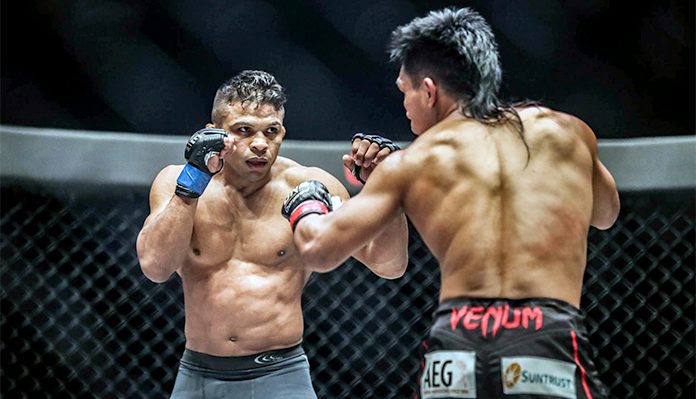 ONE bantamweight champion Bibiano Fernandes is about to fight Kevin Belingon for the fourth time. The pair will collide with the bantamweight title on the line at ONE: Century this Sunday in Tokyo, Japan.

Despite the fact that he’s once again preparing for a familiar foe, Fernandes says his focus hasn’t wavered.

Fernandes never expected to fight Kevin Belingon four times, but after beating them with a first-round kimura in their first fight, he never expected a second fight either.

“I believed it was finished after the first time,” he said. “But he always wins his way back to me. That’s ok too. I keep myself motivated.

“I’ve done jiu jitsu all my life. Sometimes you have to fight a guy 10, 6 times. No problem. I can prove my skill.”

While Fernandes has no objection to fighting Belingon again, he is of course looking to put a decisive end to their rivalry in Tokyo so that a fifth fight is not necessary.

“I have to go in there and fight Kevin,” he said, emphasizing his intention to push the action. “I have to be ready for striking, grappling, everything in the fight. I’ll make little adjustments and we’ll see what happens.

“I’ll cut angles,” he added. “I think that’s very important in this fight.”

Bibiano Fernandes comes from a jiu jitsu background, while Kevin Belingon comes from a Wushu striking background. Despite their differing origins, Fernandes believes he is Belingon’s equal on the feet — perhaps even his better.

“I come here to get the knockout or submission, I don’t fight for decisions,” he said. “If I can get the finish, I’ll do it.

“My striking has very improved. I was close to [knocking him out] last time we fought. When you look at Kevin, he’s a striker. But my striking has better technique. Kevin has the spin-kick, that’s the one thing he has, but I believe my striking is better.”

The time is almost at hand for Bibiano Fernandes and Kevin Belingon to settle their score once and for all. Fernandes is looking forward to the opportunity to do so, then head home to be with his family in Vancouver.

“I want to defend my belt then go home to my kids,” he said. “Then we’ll see what happens next.”