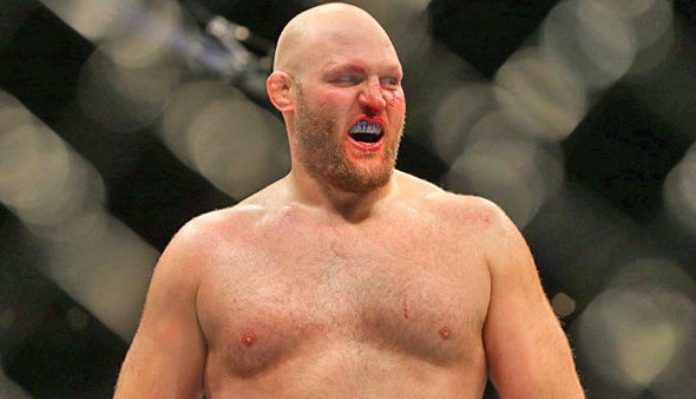 Ben Rothwell has opened up on his departure from the UFC.

Rothwell was scheduled to face Alexander Gustafsson on May 21 but was surprisingly released by the promotion just weeks before the fight. Originally there was no word on why he was let go, but now ‘Big Ben’ has revealed that he was the one who asked for the release.

“The fight got brought to us in January and they announced it,” Rothwell said on The MMA Hour. “Me and my management sat back and were like, ‘well it’s the last fight on the deal what comes next, what are we going to do?’ We went to the UFC and said ‘are we going to sign something, are we going to get something done ahead of this fight? In my mind, I have seen the landscape, where I’m at in the picture. They’ve let go of some of the big heavyweights. Even if I go in and perform well, knock out Gustafsson in the first round, look great, what’s gonna happen next?

“They came back and we asked, ‘are we gonna sign a deal?’ They came back and said, ‘hey, let’s see what happens after this fight.’ We kind of talked about it and suspected that was the answer,” Rothwell added. “That kind of left the door open for, ‘go on and win, do great, and that’s it, we’re gonna let you go anyway.’ I didn’t like that, and we asked for our release in February, I said I only got so many more fights and this fight is just a fight to make money. What is it really going to do? I’m going to fight Gustafsson who is a name but he’s 0-3 and the fight is just a fight.

“We just asked for our release, there was a period of time they were going back-and-forth, I think it caught them by surprise if anything,” Rothwell continued. “I’ve been with them for 13 years. So they granted it us, and they didn’t have to. I have nothing bad to say. I’ve had a good 13 years being a professional fighter.”

Once Ben Rothwell hit the open market he was quick to sign with BKFC as he says the deal was too good to pass up.

According to Rothwell, the deal is a six-figure deal with the possibility of making seven figures should he win some fights. He also says it’s a better deal than his UFC one.

“It’s a very good deal, for me, in the short term yes it’s a better deal (than the UFC). I can’t really get into too many numbers but let’s just say I’m a six-figure fighter, and if I win my next three fights, I’ll make seven figures,” Rothwell concluded.

At this time, it is uncertain when Ben Rothwell will make his BKFC debut but it will likely happen sooner than later.

What do you make of Ben Rothwell signing with BKFC?