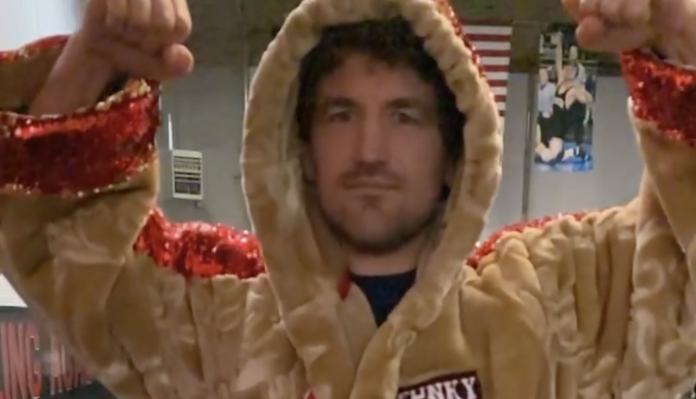 Former UFC welterweight Ben Askren called out Nate Diaz for a UFC fight, saying he “would be happy to be the last fight on his contract.”

Askren retired from the UFC after losing to Jorge Masvidal and Demian Maia citing lingering injury issues. Following his retirement, Askren returned to combat sports in boxing, having been knocked out by Jake Paul earlier this year. Since then, we have not heard much from Askren in regards to fighting again. But it appears as though “Funky” is interested in a return to combat sports, only this time in the UFC, and he has a specific opponent in mind.

Taking to his social media on Tuesday, Askren called out Diaz after the two got into a bit of a back-and-forth the day before. Askren had said that he thought Paul was a good boxer, which led to Diaz firing back and telling Askren he knows nothing about boxing. According to Askren, he’s inclined to agree with Diaz that his boxing skills are not up to par. However, Askren also wants Diaz to know that he doesn’t have MMA skills that are up to par, either.

Nate is right, I suck at boxing. He sucks at MMA. If he wants me to prove it I can be in the USADA pool tomorrow. Would be happy to be the last fight on his contract.

Nate is right, I suck at boxing. He sucks at MMA. If he wants me to prove it I can be in the USADA pool tomorrow. Would be happy to be the last fight on his contract.

It will be interesting to see if anything comes from this. Right now, Askren is retired from the UFC so he would need to go through the USADA testing pool before he is eligible to re-join the active UFC roster. As for Diaz, just as Askren said, he only has one fight left on his UFC deal, and it’s hard to believe the UFC would give him Askren for that last fight. Then again, if this is the fight that the fans want, then it is possible that it could get booked.

Do you want to see Ben Askren fight Nate Diaz?