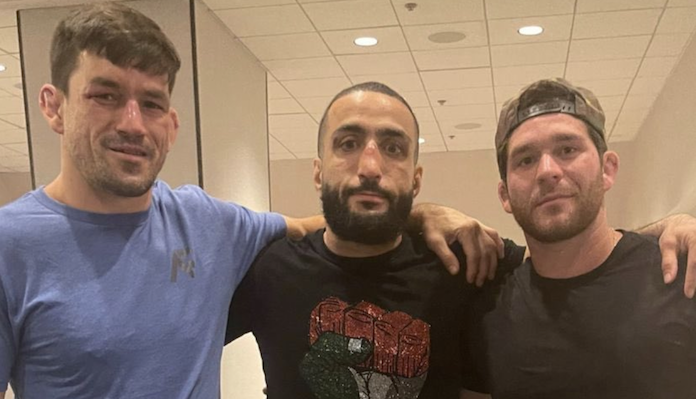 Muhammad won a unanimous decision over Maia on the main card of UFC 263 this past Saturday night in Glendale, Arizona. For Muhammad, this was arguably the biggest win of his career, and by taking out Maia, he will now be ranked in the top-10 of the UFC welterweight division. For Maia, however, this could have been the last time we saw him in the Octagon, as UFC president Dana White suggested later his time with the UFC is over.

Taking to his social media following their fight at UFC 263, Muhammad praised Maia, posting a picture of the two after their fight and calling him a “legend” and “class act.”

Honor to share the cage with a legend 🙏🙏🙏 @demianmaia pic.twitter.com/otQsIZOVfW

Honor to share the cage with a legend @demianmaia

For Muhammad, beating Maia will get him into the UFC welterweight top-10 and get him closer to reaching his goal of fighting for the belt one day. Aside from a No Contest with Leon Edwards in his last fight, Muhammad has won his last five fights in a row and appears to be fighting at the highest level of his career. Although he wasn’t able to knock Maia out or submit him and put a stamp on the win, just getting by the Brazilian is a big feat in itself as Maia is incredibly tough and even the champ Kamaru Usman wasn’t able to finish him.

For Muhammad’s next fight, he is looking to take on Edwards in a rematch, but that seems unlikely as Edwards will probably fight for the title the next time he fights. For Muhammad, look for him to fight someone else in the top-10 for his next outing at 170lbs.

What do you think is next for Belal Muhammad after beating Demian Maia at UFC 263?