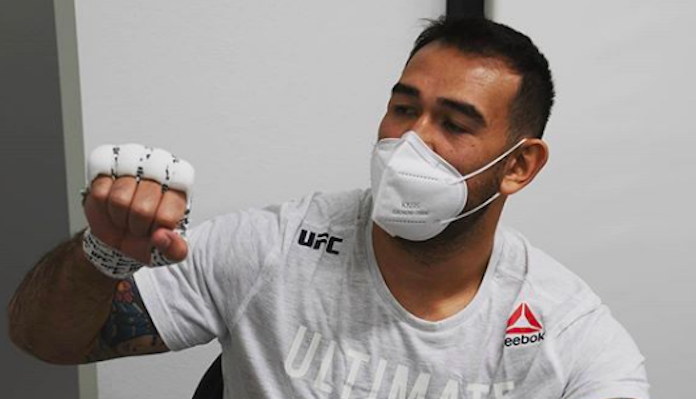 UFC heavyweight Augusto Sakai has revealed the injuries he sustained during his loss to Alistair Overeem last weekend.

While the rising contender Sakai did look dangerous at points during his showdown with the veteran, he seemed to be overwhelmed by “The Reem” once the fight made it into the championship rounds. At that point, Overeem completely took over before finishing the bout with vicious ground & pound early in the fifth.

During a recent interview with Ag Sports, Sakai wasn’t shy about letting the world know what kind of pain he was enduring in that fight with Overeem.

“In the second round, I was hit with a knee that dislocated two of my ribs,” Sakai said (via Bloody Elbow). “When he took me down, he hit me with an elbow that broke two more. So I was without four ribs, so to speak. That got in the way a lot. I could not defend takedowns. I could not show my jiu-jitsu. I could not defend myself very well. Kudos to him.

“I’m sure he used his experience in his favor, but I was expecting that.” Sakai continued, offering Overeem some props. “What made things difficult for me, and I’m not trying to come up with an excuse here, was the pain in my ribs. Even then, I tried to endure it as much as I could.”

Overeem released his own short and sweet statement after the win as he continues to pursue one more shot at the UFC Heavyweight Championship.

“What a night! Huge shoutout to my team @elevationfightteamco for all the hard work and a big thank you to my fans, family and friends for the support. See you again soon #onefinalrun #ufcvegas9”

With four wins in his last five fights, with the fifth being a buzzer-beater loss to Jairzinho Rozenstruik, Overeem is quite clearly in the conversation for a future title shot against Stipe Miocic.

His last meeting with the champ back at UFC 203 didn’t exactly go to plan, but Overeem is clearly the sort of fighter that is able to reinvent himself regardless of what limitations people believe he has.

There are plenty of contenders ahead of him in the queue to get a shot at Miocic, including Curtis Blaydes and Francis Ngannou who both have wins over Overeem, but you can never say never in mixed martial arts.

Do think Alistair Overeem has one final title run left in him?