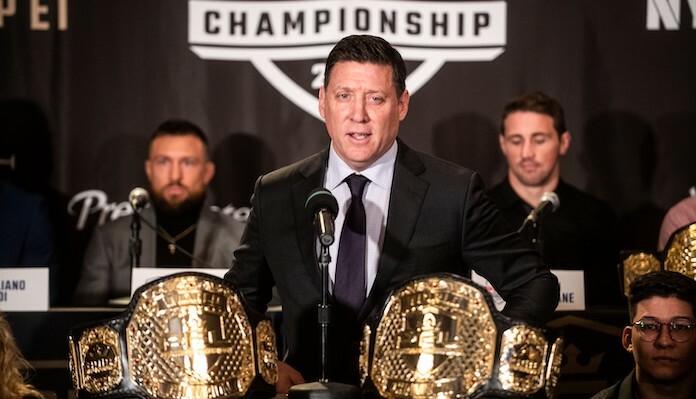 These days, Peter Murray is known as the head honcho for the Professional Fighters League (PFL), a fast-rising mixed martial arts promotion based in the United States that features a one-of-a-kind regular season, playoffs, and championship format.

Prior to helping the PFL revolutionize the way the sport of mixed martial arts is presented however, Murray was already a creative force behind some of the biggest brands, companies, and agencies.

As a child, the Bronx-raised Murray grew up wanting to become a police officer.

“When I was a kid, I really wanted to be a police officer,” Murray shared on an episode of Dave Meltzer’s The Playbook. “I have family in the NYPD, I grew up a New York City kid in the Bronx, I thought they were leaders in the community, doing the right thing on behalf of people, helping people.”

Murray actually made it into the Academy, before realizing that his passion was elsewhere.

“But I decided to follow a passion, and that passion is in marketing. I tapped the creative mind that I felt I had at the time and I got into advertising. That was my first career opportunity,” he said.

Yearning for even more growth in terms of experience, Murray left the NFL after 13 years for the entertainment agency William Morris Endeavor, where he assumed the role of Executive Vice President.

Murray’s three-year stint with WME became the catalyst for him eventually co-founding his own sports and entertainment marketing agency.

“I really learned in that agency space, your own IP is what matters, and so I decided to launch my own company, Insignia, three years later,” Murray said.

Among Insignia’s list of high profile clientele were the Pro Football Hall of Fame, the World Series of Poker, the NFL’s Miami Dolphins, and sportswear brand Under Armour.

“I hired a great team, people believed in me, they believed in the opportunity. They left big companies to work with this band of pirates to create and carve out our space in this world,” Murray said.

While Murray was one of the driving forces behind Insignia, his tenure there would only last two years, as the next stop in his journey would take him to Under Armour.

Murray recalls, however, that leaving Insignia was the most difficult decision he’s ever made in his career.

“The hardest thing I’ve ever had to do in my career was leave my baby, and that was Insignia, a company that I conceived, I founded, I was the president and CEO and co-founder.”

In 2014, Murray was recruited by Kevin Plank, CEO of Under Armour, to be the company’s Vice President of Global Brand and Sports Marketing.

“Kevin presented an opportunity that I could not turn down,” Murray admitted.

“All of those experiences, from advertising, to the entertainment space, to my own entrepreneurial company in Insignia, and then on to Under Armour, led me to this opportunity with the PFL,” Murray said.