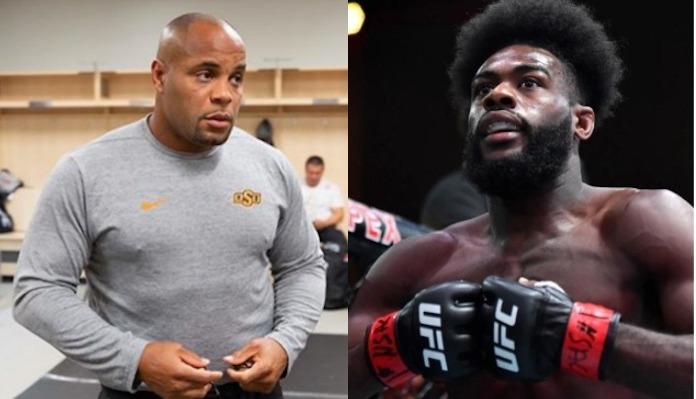 UFC commentator Daniel Cormier has some advice for the promotion’s new bantamweight champion, Aljamain Sterling: Step away from the Internet.

Sterling returned to the cage at UFC 259 last weekend, when he challenged Petr Yan for the bantamweight title. Regrettably, this fight ended in disaster when Yan blasted Sterling with an illegal knee. When Sterling was unable to continue, he was named the victor by disqualification, which meant that he became the new champion—but under pretty unfortunate circumstances.

Since then, Sterling has been the subject of widespread criticism, with many fans and pundits questioning his status as champion—and so far, he’s been quite willing to engage his naysayers online.

“I just saw the one from Ariel Helwani and [Cormier] talking about I’m parading around and boasting a belt,” Sterling told MMA Fighting after the fight. “One, show me one post on my social media where I’m boasting about winning anything or celebrating anything,” Sterling said. “I’m happy my friends came to my house, had about 30-plus people at my house. They were all excited to see me. I didn’t even see the belt because I left it in the octagon. Somehow it showed up at my house, they brought it over while I’m eating chicken, you can see I’m licking my fingers and they’re like ‘open it’ and I’m like I really don’t want to do this.

“Also, there’s about 30 cameras out so they’re all expecting this big reaction from me to be like ‘I’m the champ.’ Yeah they’re like ‘just celebrate it, you earned this, please bro, just enjoy the night, you worked so hard.’ I get all that but I don’t feel like a winner,” Sterling added. “They’re there, they want to take a picture with me holding the belt. I don’t feel like the champ but if you guys feel this is going to make you guys feel happy or whatever, just know that I’m not posting any of this, I’m not re-posting any of this cause I don’t feel like I did anything.”

It didn’t take Cormier long to catch wind of this comment from Sterling, and he responded with a piece of advice for the new bantamweight champion.

. Young brother @funkmasterMMA just get off the internet bro. You don’t need to explain, it isn’t helping. We will talk, it’s what we do. You have to just leave it alone! Enjoy your time, recover, spend time with your family and just relax. Can’t fight every battle https://t.co/kjozYw3Wxy

“Young brother, just get off the internet, bro,” Cormier wrote on Twitter. “You don’t need to explain, it isn’t helping. We will talk, it’s what we do. You have to just leave it alone!

“Enjoy your time, recover, spend time with your family and just relax. [You] can’t fight every battle.”

What do you think of this back-and-forth between Daniel Cormier and Aljamain Sterling?