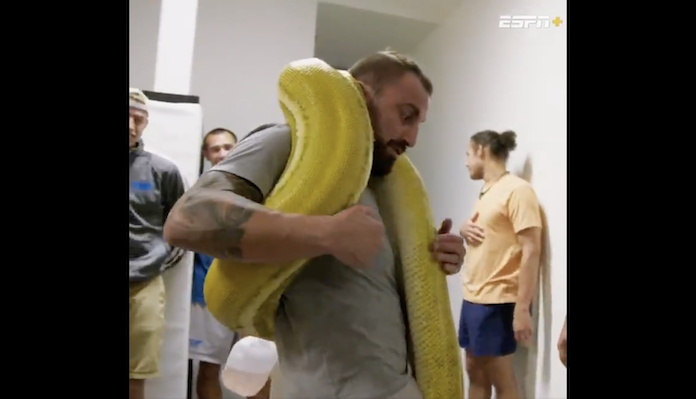 UFC featherweight champion Alexander Volkanovski was pranked with a giant snake by Brian Ortega on TUF 29, and you can watch the video of it.

Volkanovski and Ortega are the two head coaches on the latest installment on TUF, and they will meet inside the Octagon for Volkanovski’s 145lbs title in September at UFC 266. The current season of the show still has one more episode to still air, but in the penultimate episode of the show, Ortega decided to prank his rival in a hilarious fashion.

Check out the video below of Ortega bringing in a giant snake into Volkanovski’s dressing room and pranking him with it during the latest set of shenanigans on the TUF 29 set.

What would you do if you walked into a room and saw THIS #ReturnOfTUF pranks are wild.

Volkanovski and Ortega were previously scheduled to meet earlier this year at UFC 260 in the co-main event of that card, but the fight fell apart when the champ tested positive for COVID-19. The initial hope was that the UFC could re-book the fight in short order and get the featherweight title defended for the first time since last summer, but the promotion decided to give the champ more time to get better from his illness, and the fight was re-booked for September. Volkanovski and Ortega will now headline the UFC 266 PPV card.

For Volkanovski, he will be looking to prove he’s the No. 1 featherweight in the world following a disputed split decision in his last outing last summer. As for Ortega, he is coming off of a decision win over The Korean Zombie and he should make for a credible challenger for the champion, though Volkanovski is the betting favorite to defend his belt.

How excited are you to see Alexander Volkanovski and Brian Ortega fight at UFC 266?