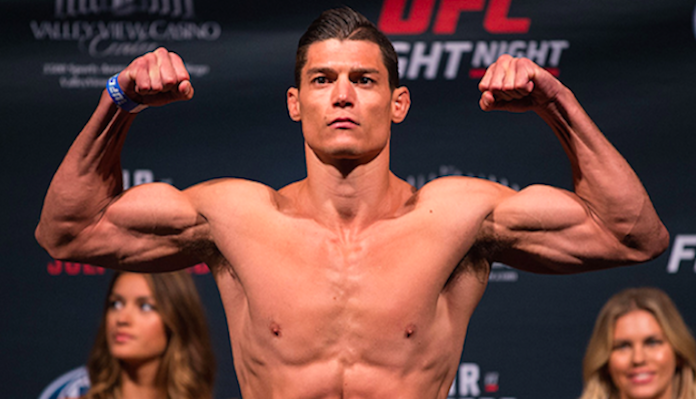 UFC welterweight Alan Jouban says he turned down a short-notice fight against Carlos Condit before announcing his retirement from MMA.

Jouban announced earlier this week that he is retiring from competing in mixed martial arts and will instead be all-in on his career as a UFC broadcaster. Speaking to ESPN’s Ariel Helwani, Jouban opened up about his decision to retire from the sport. He said it was a difficult call, but ultimately one he had to make. However, he admits that recently turning down a fight against Carlos Condit — a dream matchup for him — wasn’t easy to do.

“If I’m being honest, they offered me what I wanted and I turned it down. That made me know, as well (to retire). I mean, it was bad timing, I’m moving right now. They offered me a fight while I’m moving and if you know anything about buying and selling homes, it’s very stressful. I have a lot of things to organize and for me to drop everything to take a fight would completely throw off everything with my family,” Jouban said.

“I’ve been wanting a Cowboy or Carlos Condit-type fight for a very long time. A year ago, I would have taken it. They offered me Carlos Condit a couple of weeks ago on short notice. And I go, I have so much going on right now and to take that fight right now, I just, a year ago, I’ve never turned down a fight, I would have jumped at it. But for me to not want that type of legend fight against somebody I respect so much, I had to turn it down.”

Jouban (17-7) is one of the rare UFC fighters who retired coming off of a win, as he defeated Jared Gooden via unanimous decision in the last fight of his career this past November. A member of the UFC roster since 2014, Jouban racked up an 8-5 overall record in the world’s leading MMA promotion. He won four “Fight of the Night” bonuses for his wins in fights against Seth Baczynski, Matt Dwyer, Belal Muhammad, and Ben Saunders.

We here at BJPenn.com wish Alan Jouban the very best in his retirement from MMA.