After brawl with Jake Shields, Mike Jackson reveals former UFC champion is challenging him to a fight: “Take your old a*s to sleep”

UFC welterweight Mike Jackson has a lot of MMA legends coming after him lately.

‘The Truth’ has been out of action since a loss to Pete Rodriguez in October. The defeat set Jackson back, as he was previously riding a two-fight unbeaten streak. However, the part-time fighter wouldn’t be out of action for long, as he ran into Jake Shields last week.

The former UFC title challenger has gone back and forth with the Houston native over the last few months. Shields has alleged that Jackson is a racist, while the latter stated that the former Strikeforce champion was a Nazi. Last Friday, the rivalry escalated beyond just words.

The incident has gotten lots of attention from fans, and it seemingly caught the eye of Pat Miletich. A former friend of Mike Jackson, he cornered the welterweight against CM Punk at UFC 225. Their friendship appears over, as ‘The Truth’ revealed in an interview with MMAJunkie.

Furthermore, the former UFC champion has been challenging Jackson to a fight. The latter seems on board with the idea. 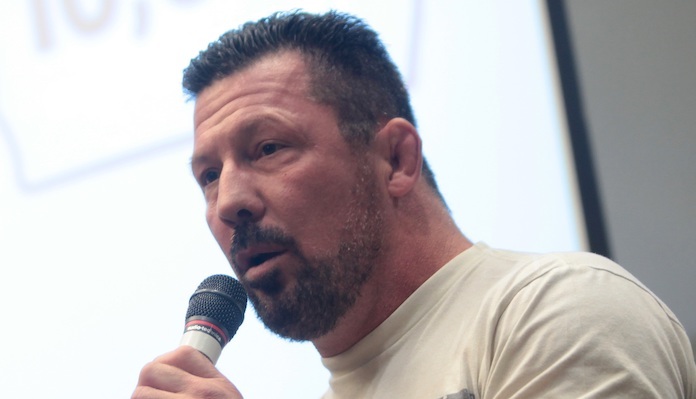 “I got people like Pat Miletich, this f*cking Nazi piece of sh*t, he’s texting me talking about, ‘This old man will f*ck you up, blah, blah, blah.’ And he’s talking about boxing, kickboxing, and MMA,” Jackson said. “I was like, ‘Pat Miletich, please, let’s kickbox, dude.’ ‘Cause I don’t want the motherf*cker to hold me and sh*t in MMA. I don’t wanna deal with all that, even though I still [know] I could wash Pat Miletich in MMA. I wanna kickbox him so bad. It’s really because he’s just talking sh*t for no reason.” (h/t MMA News)

He continued, “Pat Miletich will text me at like, one in the morning, randomly, and just say some wild flagrant sh*t. I’m like, ‘Yo, take your old ass to sleep. You don’t want these problems.’ But apparently Pat Miletich really wants to fight me.”

“So, I’mma finish this den up a little bit, make some money, and then I’mma go and f*ck Pat Miletich up… I just wanna give you a little insight of what white nationalists are doing at one in the morning, they texting me.”

This article appeared first on BJPENN.COM
Previous articlePro-fighter Ali Expansion Act to be brought before U.S. Senate in 2023
Next articleSean O’Malley reveals that he’s doing nothing but grappling in preparation for UFC title shot: “I know I need to improve”
© Newspaper WordPress Theme by TagDiv