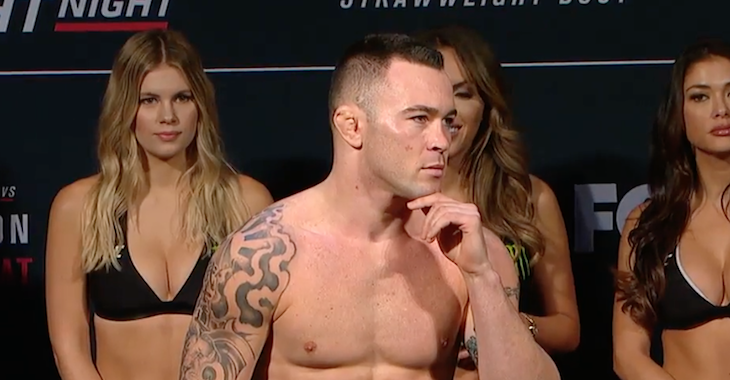 Round one begins and Covington misses with an early kick. Kim presses forward and pushes Colby against the fence. Covington scores a foot sweep and gets “Stun Gun” to the ground. Kim is quick to get back up to his feet but Colby is all over him. Covington lands a hard knee to the body of his Korean opponent. He moves to the back of Kim and scores a head kick from that position. Very nice stuff from Colby here. He drags Kim to the floor and winds up in full guard. Kim battles his way back to his feet but eats a left hook and then a pair off knees for his troubles. Covington and Kim pressed against the cage and continues to batter Dong with knees. He lands a spinning elbow as they break off the cage. Colby with a front kick to the body. Kim pressing forward now. He lands a right hand but Colby quickly shoots in and scores another takedown. Kim scrambles back to his feet and round one comes to an end.

Round two begins and Covington shoots in for a takedown but Kim shows off an amazing sprawl to defend the shot. Covington continues to work for the takedown and now he has it. Colby is working from half guard here but the “Stun Gun” is quick to scramble and get back to his feet. Colby still has Kim pressed against the fence and lands a knee. They break and Colby lands a huge right hand that rocks Kim. Covington with a left hand and then he shoots in and scores a double leg takedown. Once again Kim is able to stand back up. He attempts a judo throw but Colby is able to defend. Covington presses Kim against the fence and begins working some knees. Round two comes to and end.

Round three begins and the fighters seem happy to stand and trade early on in the final frame. Good shots from both men here. Cobly with a left and then Kim replies with a nice right hand. Covington finally shoots in and scores with a beautiful double leg takedown. “Stun Gun” quickly scrambles and gets back up to his feet but Colby has his back. Covington drags the Korean back down to the canvas and begins working some short punches. Those shots allow Kim to scramble and get back up but he eats a few knees to the body for his efforts. Kim reverses the position and is able to score a takedown of his own. Under a minute remains here. Colby is able to scramble and reverse the position to end round three.