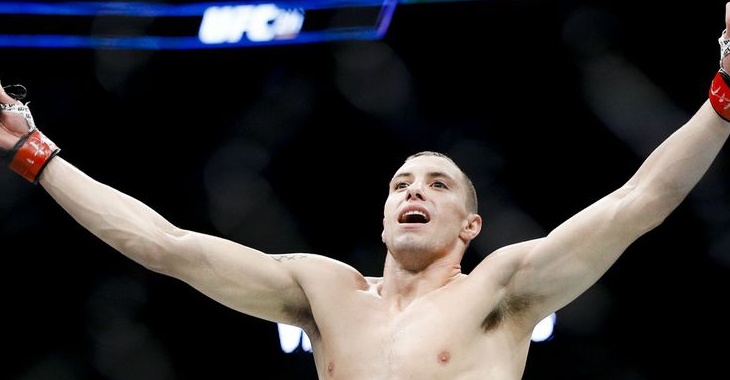 Round one begins and Vick start things off with a side kick. Trinaldo presses forward but eats a leg kick for his troubles. Francisco with a nice kick to the body. Vick replies with a front kick. Trinaldo is wasting no time here. He leaps in with a left hand over the top. The Brazilian pushes Vick up against the cage and works in a knee. The fighters break and Vick throws a front kick to the body. He misses with a follow up jab and then opts to circle out. Trinaldo with some forward pressure now. He lands a big left hand. Vick replies with a right hand that drops Trinaldo. James moves in for some ground and pound but Trinaldo sweeps him and locks in a guillotine choke. The submission hold is tight. Somehow Vick survives and scrambles into top position. Wow. Vick opts to stand back up and we are back on the feet. Vick with a front kick followed by a pair of jabs. Vick with a push kick and then the horn sounds to end round one.

Round three begins and Trinaldo immediately presses the action. He lands a left hand over the top after Vick missed with a body kick. James circles and then leaps in with a flying knee attempt that misses. Vick continues to utilize a lot of movement. He ducks under a right hand and then lands a leg kick. Trinaldo is doing everything he can to slow Vick down but just can’t seem to do it. Vick with a side kick that lands flush to the body. Trinaldo replies with a jab to the body of Vick. James circles along the fence. Trinaldo catches him with a body kick. Vick replies with a side kick to the ribs. Vick is doing a great job of utilizing his height and range here. Two minutes remain in the fight. Trinaldo misses with a spinning back fist attempt. He lands a hard body kick. Vick did not like that. James returns fire with a pair of low kicks. He just misses with a wheel kick attempt. Trinaldo continues to press the action. He eats a high kick but is able to press Vick against the cage. That doesn’t last long as James quickly breaks free. The horn sounds to end round three.