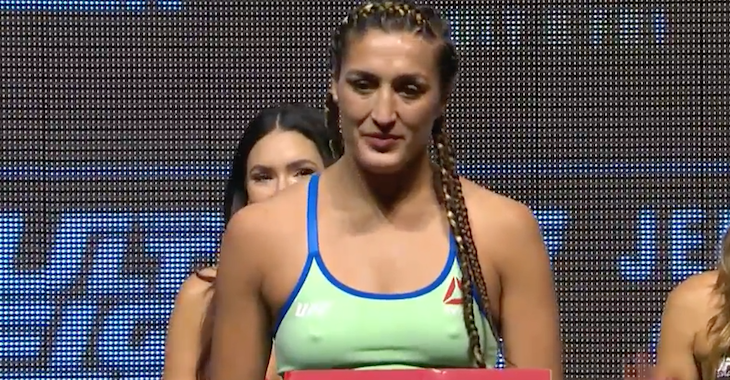 Carla Esparza enters tonight’s fight with Suarez on the heels of a controversial split-decision loss to Claudia Gadelha which took place at June’s UFC 225 event in Chicago.

Prior to the setback, “The Cookie Monster” had reeled off two impressive decision victories over opponents Cynthia Calvillo and Maryna Moroz.

Meanwhile, Tatiana Suarez enters tonight’s contest sporting a perfect record of 7-0. Suarez was last seen in action this past May where she defeated Alexa Grasso via first-round submission.

Round one begins and Suarez paws with her jab early. Carla moves forward but Suarez shoots in and goes for a takedown. It is not there at first but she continues to work for it and eventually does secure the takedown. Carla looks up and eats a big right hand. Elbows now from Suarez. She is busting Esparza up here. More big ground and pound from Suarez. This is very impressive stuff against an always tough Carla Esparza. “The Cookie Monster” is trying to get back to her feet but Suarez still has her wrapped up. Tatiana sends her back down to the canvas and Carla is now flat on her back. Suarez with left hands from the top now. Ninety seconds remain in round one. Esparza attempts to scramble back to her feet but Suarez continues to stay glued to her. Body shots now from Suarez. She moves to side control and lands some hammer fists. Carla scrambles and gets back to full guard. Another scramble and Carla is back to her feet. Suarez quickly drags her back to the canvas but Carla works her way back up. Finally the horn sounds to end round one.

Round two begins and Suarez comes out and just misses with a head kick. She continues to press and shoots in for a takedown. She brings Carla to one knee and begins to slowly drag the former UFC champion to the floor. Suarez steps over into mount but Carla quickly scrambles and is able to get back to her feet. Suarez remains on her and has her pressed against the cage. Suarez with some knees in the clinch. She picks Carla up and slams her to the floor. Suarez is working from side control now. She lands some big punches from the top. Carla is doing her best to get up but just can’t. Finally she does but Suarez remains all over her and lands a big knee followed by a trip. She winds up in side control once again and Carla looks frustrated. Esparza scrambles and winds up on top. That position is short lived as Suarez scrambles and gets back up to her feet. Tatiana with a head kick and then she immediately shoots in and lands another takedown. Esparza attempts to scramble but remains grounded. The horn sounds to end round two and UFC 228 continues to deliver.

The Khabib of the female divison? #UFC228 pic.twitter.com/VY4TvrsRhq

Round three begins and Suarez comes forward with a side kick. She shoots in and lands yet another easy takedown against the fantastic wrestler that is Carla Esparza. Tatiana with some ground and pound now. Carla is looking to setup and armbar but it is not there. Suarez moves to mount and lands a big elbow. Carla fights her way back to full guard but continues to absorb punishment. This has been just a clinic from Suarez. She moves back to full mount and begins pouring down more punishment. This is close to being stopped and it is. The referee finally steps in. What a finish.