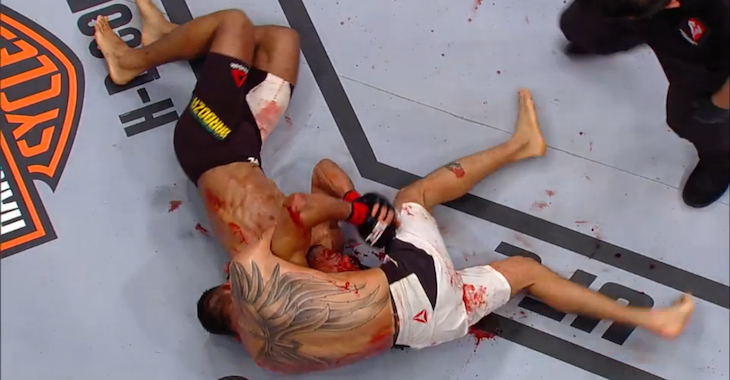 Tony Ferguson is seemingly in the best of spots and the worst of spots. He’s on a nine-fight win streak, he’s ranked #2 in the division, and he’s about to fight Kevin Lee (#7) for an interim UFC lightweight title. With Conor McGregor supposedly making his UFC return as early as the end of this year, it’s a no-brainer that Ferguson wants a fight that would simultaneously earn him a lot of money, and delete the “interim” that would preface his name. Tony Ferguson had a plan to fight Nate Diaz in order to leave no doubt he was next up for McGregor, but he told Jim Edwards at MMA Uno that it fell through.

“We tried to make it happen, I wanted to make [a fight with Nate Diaz to] happen because it was going to set something up with Conor [McGregor]. Maybe want him to comeback, and defend or vacate, or something around those ends. I’m not going to make someone fight who doesn’t want to fight, like Khabib. I got Khabib and I got Nate Diaz, two guys who are really willing and waiting to fight and they just don’t want to be part of it. That tells me they know I’m the biggest threat in this division man. I might be the hammer head, I might be the Great White, or the Mecha.”

“[Diaz] was saying something about me being in cahoots with my management or something else like that, I’m like dude, you’re smoking the wrong sh-t. You’re smoking your own stuff and you need to get off of that because you’re high as f-ck. Get back in the Octagon because the fans miss you. I don’t miss you, I don’t give two sh-ts. You can go retire, get back on your bike and do some other sh-t. We’re here fighting man, and you guys are getting replaced soon.”

Maybe he hopes his profanity-laced rant will end up getting Diaz’s attention. After all, it was a similar expletive fest that got Diaz the shot at McGregor to begin with. Tony Ferguson can’t overlook Kevin Lee though, but he thinks he’ll get him with the same submission he’s won three of his UFC fights with so far. No matter who wins between Ferguson and Lee’s fight, Justin Gaethje and Eddie Alvarez’s fight at The Ultimate Fighter 26 Finale should decide who gets winner next.