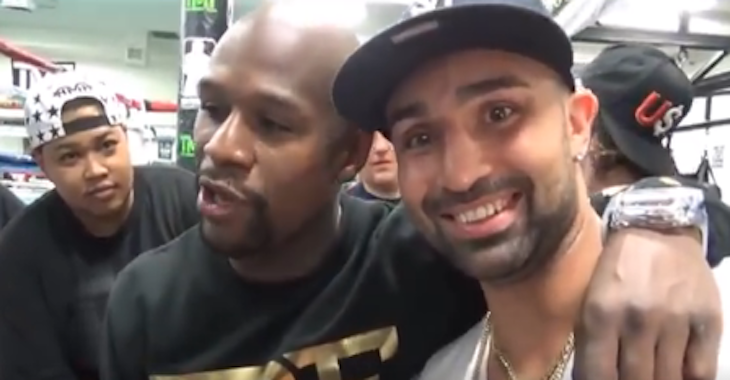 For a brief period, retired boxer Paulie Malignaggi served a sparring partner for Conor McGregor in an effort to help the Irishman prepare for his Saturday scrap with Floyd Mayweather. Unfortunately, McGregor and Malignaggi’s work together spawned one of the most high-profile beefs in combat sports, as Malignaggi didn’t like how he was portrayed by the UFC champ, and made multiple attacks on his character thereafter.

This beef reached new heights in the days leading up to the big Mayweather vs. McGregor fight, when a video surfaced of Mayweather and Malignaggi suggesting Malignaggi had been a spy for Mayweather.

Soooo, did @FloydMayweather send @PaulMalignaggi into #McGregor's camp as a spy?

Apparently, however, anyone who bought this claim is a “bum groupie”. On Monday’s edition of The MMA Hour, Malignaggi assured he and Mayweather were just joking around about this espionage business.

“We were just catching up and joking around,” Malignaggi said on The MMA Hour (h/t MMA Fighting). “Just having a good time. [Floyd] was in very, very good spirits. You wouldn’t even realize it was fight week for him if you didn’t know him.”

What do you make of the heat between Paulie Malignaggi and Conor McGregor? Do you want to see them fight?