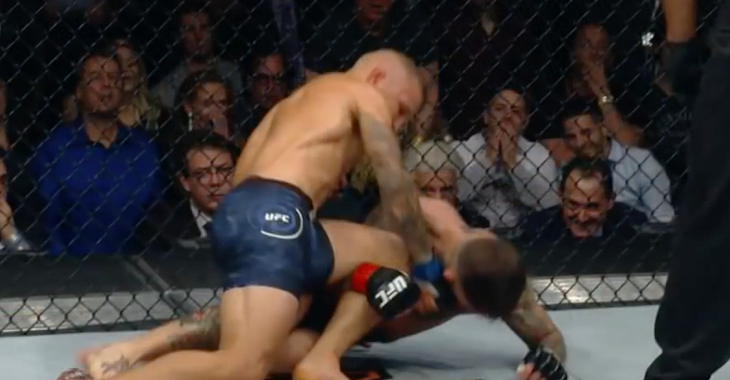 The UFC bantamweight title fight between Cody Garbrandt and TJ Dillashaw was an exciting back and forth battle at UFC 217.

Round one ended with Garbrandt knocking down Dillashaw and had him wobbly while getting back on his feet. Dillashaw turned things right around in round two and knocked Garbrandt down twice, ending the fight following up with ground and pound after the second knockdown.

Following the fight, the two former teammates were able to shake hands and showed each other respect. However, Garbrandt stated that although he respects Dillashaw as a fighter, he still stands by all the things he said leading up to the fight. Speaking on Monday’s episode of The MMA Hour, Dillashaw talked about Garbrandt’s post-fight feelings toward him.

“I’m not one who looks for the drama,” Dillashaw said (transcribed by Shaun Al-Shatti for MMA Fighting). “I’m not one who wants to hate on anybody. I didn’t leave because I hated anybody. I didn’t want all of this bullcrap. So yeah, I was hoping it would get squashed a little more than it was, and they’d be a little more mature about this whole thing and be professionals. I was hoping it was more about him hyping it up, but I guess that’s how he feels, so whatever, man. I’m not too worried about it. He’s going to have to fight. We have a very tough weight division.”

Dillashaw added what he feels Garbrandt will have to do to get a rematch and opened up on one of the holes in his game that he exposed during their fight.

“He will be around, but he’s going to have to have some tough fights to even get back to me, so who knows if I showed his weakness. You know, I don’t think he actually has a chin. Even Cruz hit him a couple of times and wobbled him, and Cruz is no power puncher. So I think if people aren’t that scared, he drops his hands — always dropping his hands, they’re real low. That’s why I caught him with a head kick. Every time he throws a punch, he drops his opposite hand. He gets away with being fast and having power, so I think he’s got a long road ahead of him.”

Do you think we will see TJ Dillashaw and Cody Garbrandt meet in a rematch? Let discuss this in the comment section.