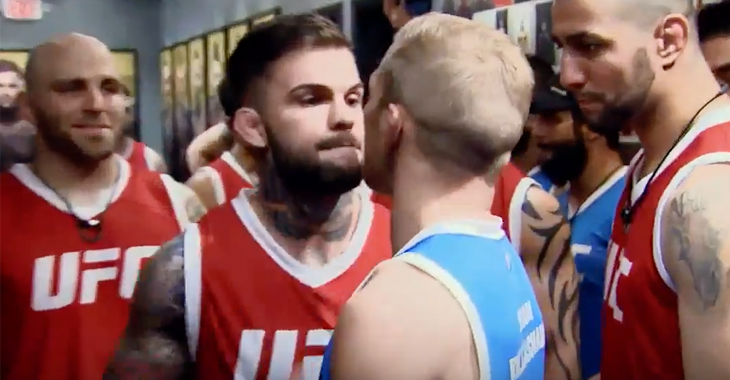 Despite losing his title to former teammate T.J. Dillashaw at last night’s UFC 217 event in New York, Cody Garbrandt still believes that he is the better fighter.

The former champion, Garbrandt, spoke about is first career setback at the UFC 217 post-fight press conference at Madison Square Garden.

“I think I was being professional (heading into UFC 217) given the facts behind (the rivalry),” Garbrandt (11-1 MMA) said after his second-round knockout loss to Dillashaw (15-3 MMA) as transcribed by MMAJunkie. “Still, I feel and think he’s a piece of (expletive) teammate. I stand beside my facts. He injured – he lies. Still. It doesn’t matter. Yeah, he won. Good for him. I’ll be back, and I’ll come with vengeance, and that belt’s going to be mine.”

“No Love” continued by congratulating Dillashaw on his title earning win.

“Hats off to T.J.” he said. “He battled back from losing his title, and he was a hungry man. But I say I’m the better fighter in there, and I’ll show that in the rematch.”

When asked that Dillashaw said to him moments after the fight was called off Garbrandt responded with the following.

“I don’t,” he said. “He probably just yelled some (expletive). He had a lot of (expletive) he was carrying on – with all of the drama. And I stand behind everything I said. He’s still not a good person, but I respect him as a fighter. And that’s that. I stand behind everything that I said about T.J., but I give him respect for going out there and capitalizing on a mistake, but I truly am the better fighter, and I want that rematch. I’m willing to put in the work and do whatever it takes to get the title back because it was something I was born to do.”

Who would you like to see Cody Garbrandt fight in his next contest? Sound off PENN Nation!