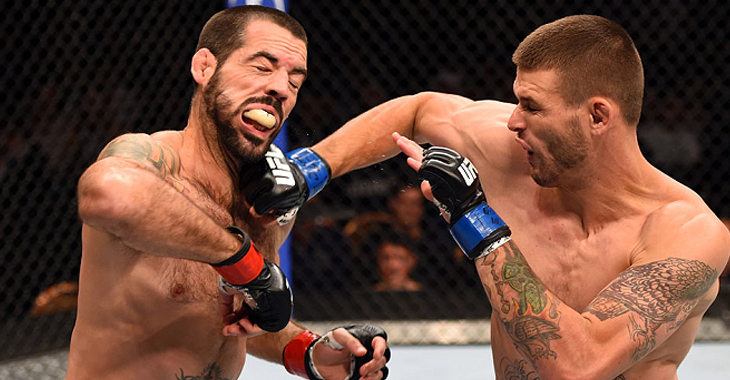 There have been a couple of cases recently where fighters have popped for banned subtances due to tainted supplements.

UFC welterweight Tim means was just given a six-month suspension after coming to an agreement with the U.S. Anti-Doping Agency (USADA) after they determined that one of Means’ supplements was, in fact, tainted.

Means was facing a potential penalty of being suspended for two-to-four-years with his positive test for a banned substance that he was unaware he was taking.

“I went and got another job,” Means told MMA Fighting. “I couldn’t be in fight mode then. I was aggravated and didn’t need to have my mindset in a fist fight, so I went and started learning how to do metal fabricating. I went from something where I was team captain in my trade to the lower end of the totem pole, to the bottom. It was a very humbling experience. I went from something I was good at, that I loved to do, to something I didn’t know anything about and really didn’t have interest in…

“The suspension that they offered, I put the worst-case scenario in my head. I have two daughters that are permanently living with me now, so there was no time to sit and wait and let stress build up. I had to keep my mind busy.”

Means said he nearly dropped mixed martial arts out of his life in frustration with his situation and not knowing the consequences of his test results.

“I wasn’t really interested in MMA [after I was flagged with the potential violation],” Means said. “I was mad. I was mad at it. I threw my whole life into mixed martial arts, and I had to step back and let USADA do its tests. [UFC Vice President of Athlete Health and Performance] Jeff Novitsky helped me, and we brought [attorney] Howard Jacobs in, so I let them do what they do, and I just tried to step back and stay sane and realize how much I do love mixed martial arts.”

Means also mentioned that he will be pursuing legal action to get any financial opportunities that were stripped from him after he was pulled from his scheduled fight with Donald “Cowboy” Cerrone due to the positive test for the banned substance.

Means hopes to get back into the Octagon in August, after his six-month suspension is up.