UFC welterweight Mike Perry doesn’t seem to be taking his loss to Tim Means all that hard based on his recent actions on social media.

Perry caused quite a stir last week after missing weight by a significant amount in the build-up to his bout with Means. “Platinum” decided to send some taunts to his opponent which wound up backfiring, because in the fight, Means outclassed Perry to claim a unanimous decision.

Now, Perry continues not to let it affect him, as evidenced by the fact he posted a video of him flaunting money around in an Instagram video. 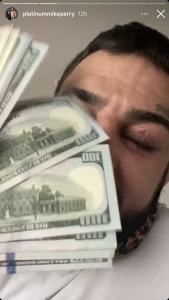 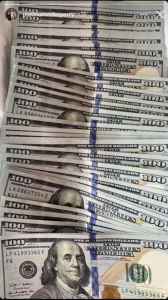 There had been some fears from fans that Perry could be cut after going 3-6 in his last nine fights, but that threat evidently isn’t on his mind right now—and UFC President Dana White seems intent to keep him around for now.

On the flip side, Tim Means was happy to reveal just how much money he received from Perry as a result of his opponent missing weight.

“He gave me $27,000, so I don’t care about what he does,” Means said of Perry post-fight. (via MMA Fighting). “He was sending me Instagram messages like, two weeks ago, eating big cheeseburgers with onion rings on them, stuff like that. It looked delicious. He asked me how the weight cut was going. I sent him some pictures of broccoli and avocados or whatever.

“I thought the fight went as planned,” Means added, breaking down his win over Perry. “I wasn’t really stressed about him not making weight yesterday, I knew he did just enough energy-wise to get within that five-pound limit to where we could still have a fight. He got up there dancing so I knew he still had plenty of energy. I knew he was gonna be strong, have a lot of heart, be durable, and that all happened the night of the fight.”

What do you think is next for Mike Perry after UFC 255?