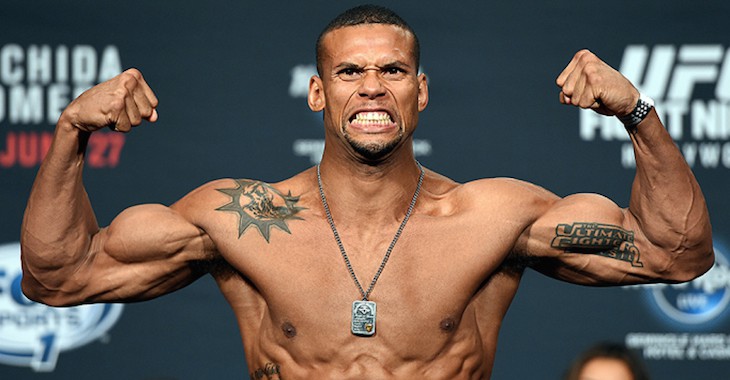 The middleweight division’s Thiago Santos has been one of their most devastating finishers since his arrival in 2013. He holds a 9-4 record in the UFC and all but one of those wins has come by knockout. Santos currently rides a three-fight winning streak and looks to extend it to four this weekend.

As is with many ranking based sports, the more you win, the higher you get ranked. Santos is currently sitting at #15 in his division of 185 pounds but he doesn’t care about that whatsoever as he detailed when speaking with MMAFighting:

”I don’t choose opponents, but I always want to fight someone in a good position in the UFC, since I’m coming off three knockouts. Anthony Smith is not among the top in the rankings, but he’s a really tough guy who’s also coming off knockouts. He beat Hector Lombard, who’s a big name, so I’m fighting tough opponents even though they are not in the rankings. I have to respect him.

This ranking doesn’t exist. This ranking is a lie, it doesn’t show the reality of the sport. I’ve been fighting guys that are not in the ranking, but they are tough. I don’t turn down fights. I’ll fight anyone. Meanwhile, these guys in the top 15 of these fake rankings won’t fight anyone outside of the top 15. I’ve been fighting guys that are way tougher than the ones that are in there. I don’t care about being in those rankings, I want to beat the guys that are in there because they think they are too good. Being in the rankings or not, that makes no difference to me. I want to fight people that will put me in a position to fight for the belt. I want to steamroll these guys in the rankings to show that this is not a real ranking.

Some of them deserve to be there, but others don’t. I don’t speak only about myself, there are other guys that deserved to be there as well. I don’t want to be part of this lie. I want to be in the rankings when it’s full of fighters that really deserve to be there. That’s how the company works, unfortunately, and I can’t change that, but I’m happy with my performances and what I’ve been doing in the biggest promotion in the world. Having that number by my name, that hashtag… I don’t want to be in these rankings, I want to become champion. Being a top-15 [fighter] can be temporary, it’s relative.

That changes the way you’re seen and paid, the numbers, but it’s not real. I cared about it in the past, but I don’t care anymore. Those who really know MMA, who care about it, like you, know who should be there and who should not. That’s not real, so I don’t get too excited about something that is not real.”

Santos fights tomorrow night at UFC Fight Night 125 in Belem, Brazil. He’ll be taking on the equally impressive as of late, Anthony “Lionheart” Smith in the second fight of the main card.

Smith is on a three-fight winning that consists all of knockouts as well. His most recent being over the former Bellator middleweight champion, Hector Lombard and prior to that a big come from behind victory over season 23 winner of The Ultimate Fighter, Andrew Sanchez.