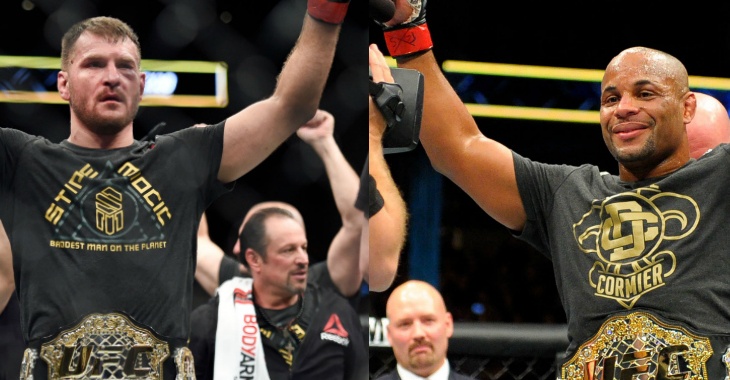 Some are calling it MMA’s first true super fight and they may very well be right. The only other time we have gotten an established champion vs champion title fight was when Georges St-Pierre took on BJ Penn at UFC 94. Yes, we did see champion vs champion when Eddie Alvarez attempted to defend his lightweight crown against featherweight champion, Conor McGregor but neither had defended their titles yet. St-Pierre and Penn had, however. GSP was the welterweight champ and Penn the lightweight champ. The end result being a win for the Canadian in dominant fashion, but this time we’re getting the big boys.

UFC 226 is officially being headlined by the light heavyweight champion of the world, Daniel Cormier as he looks to take away Stipe Miocic’s heavyweight title that he just broke the record defending. The two champions had their first staredown today at the UFC Performance Institute. Check it out:

Both champions last fought and defended their titles at UFC 220 which set things up perfectly for this amazing matchup. Cormier defended his belt against the streaking Swiss, Volkan Oezdemir which effectively led to him running out of viable options for a next defense anytime soon. The same thing could be said for the heavyweight king, Stipe Miocic after he fended off the scariest fighter in recent memory, Francis Ngannou when he took him through a five-round hell on route to a unanimous decision. This win gave Miocic the all-time title defense record among UFC heavyweights with three straight.

Alongside the UFC 226 champion vs champion super fight is rumored to be another one pitting bantamweight champion against the most defending champion of all time, flyweight champion, Demetrious Johnson. Nothing has been made official yet in regards to that bout but each has expressed interest in the fight as has UFC President, Dana White who has said that the fight will “100% happen”. We’ll just have to wait and see.

Who do you have winning in one of the biggest(literally) fights we’ve ever seen?