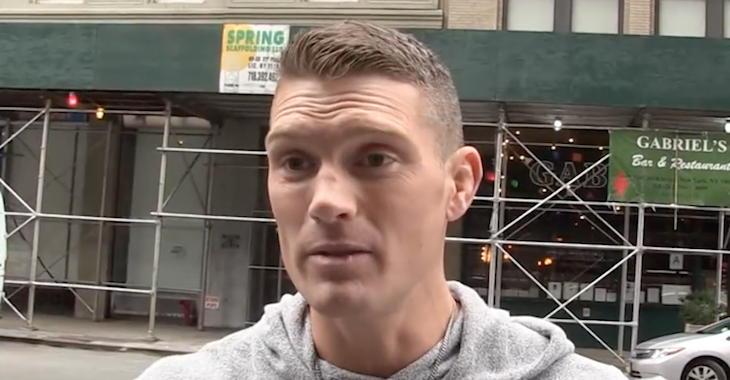 It’s crowded at the top of the UFC welterweight division. Closing in on divisional apex predator Tyron Woodley is an increasingly long list of ferocious contenders, from Colby Covington, to Rafael dos Anjos, to Stephen Thompson, to Darren Till to Kamaru Usman.

The sprint to the next welterweight title shot, of course, would seem to come down to two men: Covington and dos Anjos. In the opinion of two-time title challenger Stephen Thompson, however, one is more deserving than the other.

Thompson gave his take on the welterweight contendership situation in a conversation with MMAJunkie backstage at last weekend’s UFC Charlotte card.

“Me and Robbie Lawler, we’re going back-and-forth (for) No. 1 contender,” Thompson said. “[Dos Anjos] beat Robbie Lawler, so why not give [the next title shot] to ‘RDA?’ He’s up there.

“I still think ‘RDA’ should face me first – that’s just me. But if anyone does deserve it, it’s definitely him.”

Whatever the case, Thompson feels its time for Woodley to get off the sidelines and defend his title.

“I don’t know what [Woodley] is playing at,” he said. “I know he came off a shoulder surgery, so I don’t know if he’s just playing for time to he heal up before he gets the next fight. But you’ve got guys that are ranked No. 3, No. 2, that definitely deserve a shot. ‘RDA’ was the champion at 155. I think the guy’s looking for a superfight, as well.”

“He’s been in the fight game a long time, so we’ll see where it goes. I really don’t know. Just fight. That’s all I say. Just fight, man. I don’t know if he’s just trying to get some time for his shoulder to heal up and saying, ‘Oh, I’m not fighting these guys, they don’t deserve it.’”

“I don’t know what he’s playing at. We’ll see what happens in the future and where his mindset is going to be and who he’s going to fight next.”

Who do you think should get the next crack at Tyron Woodley?