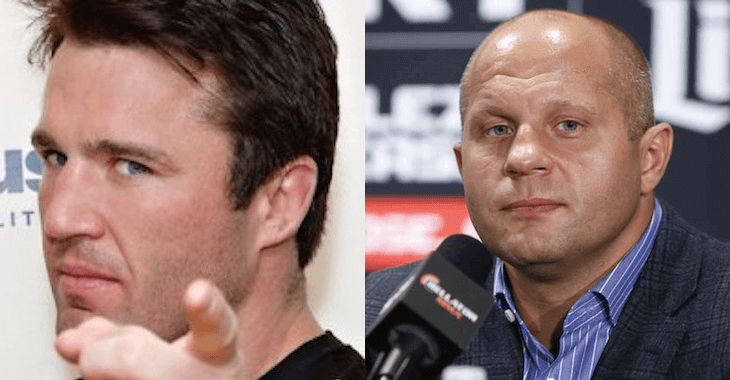 Fedor Emelianenko piqued diehard fans’ interest when he announced he would be coming out of retirement for a MMA return. Rumors circulated whether or not “The Last Emperor” would be making his way to the UFC, but it seems as if the image of Fedor in an octagon just wasn’t meant to be; The Russian signed a deal with a new promotion based out of Japan and is rumored to be fighting a heavyweight with just one fight to his name.

Even though Emelianenko’s opponent wasn’t announced during a recent press conference, it is still expected that he will be fighting a heavyweight that doesn’t have much value to his name or momentum. Sonnen ripped into Fedor’s choice in opponents and broke down the former PRIDE champion’s legacy.

“Here’s what you want to do: You want to fight the easiest guy that you can for the biggest paycheck,” Sonnen told MMA Fighting. “Fedor, he’s doing that really well. Who’s in Japan right now? What’s the parity? Who are they gonna match him up with? There’s not even a sweepstakes for Fedor right now. There’s no division whatsoever, so the likelihood that he gets an easy draw and sells a bunch of tickets doing it, I think there’s a pretty good chance there.”

Fedor has always been viewed as the greatest heavyweight of all time by long-time watchers of the sport. The fact that he has never stepped foot in the octagon makes it easy to debate that claim, and Sonnen believes he is overrated.

“He’s definitely overrated, but he’s not that highly rated,” Sonnen said. “They watched some of those matches and they’re more than happy to forget when he came over to the states and actually did a sanctioned fight with a real referee that’s not wearing an earpiece. They forgot about those. The average human being doesn’t have the foggiest idea of who he is. And history is not going to reflect well on Fedor Emelianenko, as far as his MMA career goes.”

Do you think Emelianenko missed his chance to prove he is the best by signing with the new promotion instead of UFC? Is he getting too old to hang with the best the UFC has to offer? Share your thoughts in the comment section below!