Sean O’Malley believes Petr Yan was “bullied” into accepting fight at UFC 280: “He turned down Chito, so I don’t think he really had an option”

The mental warfare between Sean O’Malley and Petr Yan is in full tilt ahead of their blockbuster bantamweight clash at UFC 280.

In his latest jibe, ‘Sugar’ has claimed that his opponent was bulled into taking the fight.

“He was the only guy after that Pedro Munhoz fight (when) I went back to the UFC and said, ‘Hey, I want to book a fight,’” O’Malley told reporters in Abu Dhabi. “Obviously that wasn’t a satisfying victory. Petr was literally the only guy in the top 10 without a fight.

“I know he was saying that he picked that fight, but I don’t believe that. I think he got bullied into it,” added Sean O’Malley.

Sean O'Malley thinks Petr Yan was "bullied" into fighting him by the UFC brass.

"I know he was saying he picked that fight – I don't believe that."#UFC280 | Full video: https://t.co/F0rXxOoM4A pic.twitter.com/cI9jlW5EFC

The match-up is certainly intriguing one. Sean O’Malley sits at #11 at bantamweight which is 11 places behind Yan in the rankings. The American has also never beaten anyone inside the top-10. 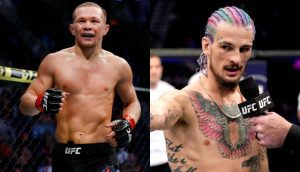 In contrast to Sean O’Malley, the Russian has reigned as both the champion and interim champion at 135lb. According to Yan, he accepted the fight because he “didn’t want a long lay-off” and he’s keen to stay active in his quest to become the first fighter to win three UFC bantamweight titles.

Yan looked imperious throughout his first 7 fights inside the Octagon. But the 29-year-old suffered his first real spell of adversity when he lost the belt to Aljamain Sterling via DQ at UFC 259. He bounced back with an impressive unanimous decision win against Cory Sandhagen to clinch the interim strap 7 months later, but lost the rematch to Sterling via split decision at UFC 273 in April.

Sean O’Malley disputes Yan’s claim that he won the fight and supports the judges’ decision – despite admitting that it was a close fight.

“It’s hard to say you won when Aljo took his back I think like three different rounds and held him for a little bit,” Sean O’Malley said. “I don’t know, I’d have to rewatch it, but I think the last time I rewatched it I have the edge to Aljo, but it was definitely close still.”

Do you think Yan was really “bullied” into fighting Sean O’Malley?

This article appeared first on BJPENN.COM
Previous articleThe UFC parts ways with three more fighters
Next articleKhabib Nurmagomedov says he doesn’t miss fighting, shoots down the idea of a comeback: “It was never inside my heart”
© Newspaper WordPress Theme by TagDiv