Khabib Nurmagomedov says he doesn’t miss fighting, shoots down the idea of a comeback: “It was never inside my heart”

Khabib Nurmagomedov has quashed any hope that he might make a surprise return to the Octagon one day.

Ever since he retired in 2020 there have been rumours that he would return. But, since laying his gloves down after defeating Justin Gaethje at UFC 254 in Abu Dhabi, ‘The Eagle’ has gone onto numerous other ventures in the sport. 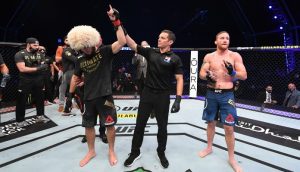 His current focus is coaching, and he’ll be in the corner of Islam Makhachev when his protege challenges Charles Oliveira for the vacant lightweight title in the main event at UFC 280.

In the wake of his retirement, there were suggestions that the Dagestani might want to extend his record to a round 30-0. Or, that he might be tempted into fulfilling his late father’s wishes by fighting the legendary Georges St-Pierre. But time has marched on, and the 34-year-old says he wont be drawn back into competition.

“Honestly no [I don’t miss it],” Nurmagomedov told The Muslim Money Guys podcast. “When I miss something like competition, I go to the gym and wrestle, grapple, train. I spend my energy there. Like comeback? Go to the cage? No, I don’t miss it.

One of the primary motives for Nurmagomedov to stop fighting was to appease his mother’s wishes. It’s looking increasingly unlikely that he’ll go back on his word now, and he believes it was ultimately not so difficult to depart.

“It’s easy. It’s very easy [to walk away],” Nurmagomedov said. “If it’s inside your heart, to leave this alone it’s very hard. It was inside my heart. Now finished, I go do other things.”

“Nothing [would make me return],” Nurmagomedov said. “Never. I leave this sport alone, without myself. There is always going to be some champion without my name, too. It’s going to be Charles Oliveira, it’s going to be Islam [Makhachev] or another name after Islam because Islam is not going to be there all his life. Short time, a couple of years, finished.”

Nurmagomedov has a rich legacy in the sport and is considered to be one of the greatest fighters of all-time. This, despite his reign as lightweight champion only lasting two years. But, having had time to reflect, it sounds like the Russian is realistic about life at the elite level.

“This is a high-level sport. I was champion, right now I’m not champion and this is normal. You can never be champion all like seven years, eight years. There is a couple of years, that’s your prime time. Finished, bye-bye. You can stay just to make money but you’ll never be champion.”

Should fans of Nurmagomedov now give up all hope of seeing him return to competition?

This article appeared first on BJPENN.COM
Previous articleSean O’Malley believes Petr Yan was “bullied” into accepting fight at UFC 280: “He turned down Chito, so I don’t think he really had an option”
Next articleBen Askren recalls first memories after Jorge Masvidal knockout: ‘F***, that’s Luke Rockhold. That means I’m in the hospital’
© Newspaper WordPress Theme by TagDiv