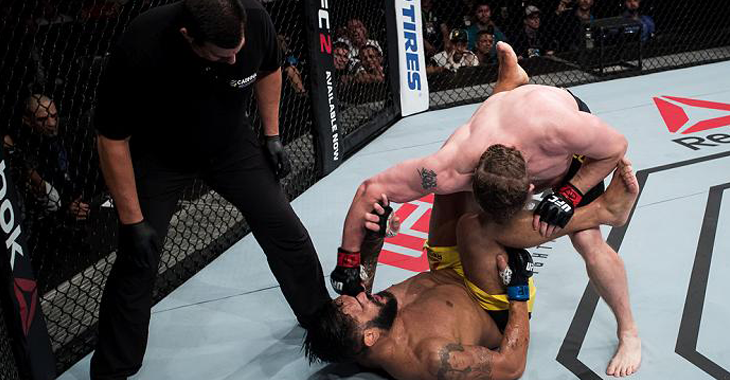 Last month, Roy ‘Big Country’ Nelson left the MMA world stunned when he knocked out heavyweight veteran Antonio ‘Bigfoot’ Silva in the second round of their highly anticipated scrap in Brasilia. While the finish was an impressive one for Nelson, it was his post-fight actions that brought him attention.

While referee Big John McCarthy was attending to Silva, who was still dazed and confused on the canvas, Nelson proceeded to give him the finger, and then deliver a running kick to McCarthy’s rear end while he was bent over attending to Silva. After the incident, UFC President Dana White, who often finds himself at odds with Nelson, stated that the fan-favorite heavyweight should be “buried” for his actions.

Even former UFC lightweight champion Benson Henderson went as far as to state that Nelson’s actions were inexcusable, pointing out that in other sports, an athlete touching a referee would certainly result in major consequences.

Now, a new report from MMAFighting has revealed that the Superior Justice Court of MMA has temporarily suspended Nelson for “assault” and “unethical behavior”. In addition, Nelson could face a fine exceeding $30,000, and could be suspended for up to two years.

The report also states that the court’s attorney is suggesting a 14-month suspension for Nelson, and a $18,500 fine.

For Nelson, at 40 years old, a 14-month suspension, retroactive or not, could potentially mean the end of his MMA career. After picking up a unanimous decision win over Jared Rosholt in the beginning of 2016 to snap a 3-fight losing streak, Nelson dropped a controversial split decision to Derrick Lewis back in July.

His win over ‘Bigfoot’ Silva put ‘Big Country’ back in the win column, but could also land him on the sidelines.