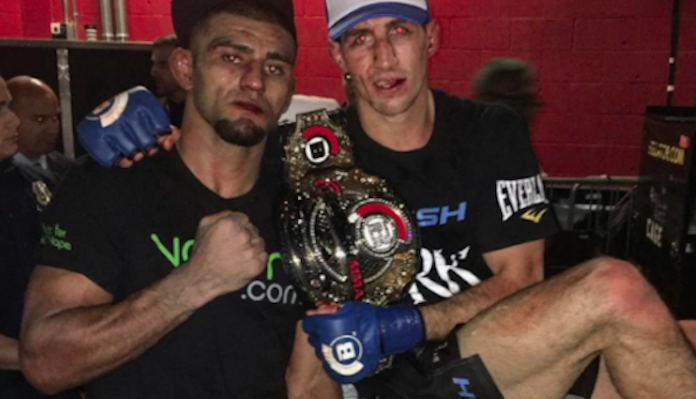 Bellator has announced a welterweight title bout between Rory MacDonald and Douglas Lima as well as a heavyweight fight between Roy Nelson and Frank Mir. The promotion announced both fights during the broadcast for Bellator 225 on Saturday night.

Bellator 231 takes place Friday, October 25 at Mohegan Sun Arena in Uncasville, Connecticut. The Nelson vs. Mir fight will headline that card and is scheduled for three rounds. This is a rematch from the pair’s first fight back in 2011, which Mir won via unanimous decision at UFC 130.

Bellator 232 takes place Saturday, October 26, also at the Mohegan Sun Arena. The MacDonald vs. Lima matchup is for five rounds and will be for MacDonald’s Bellator welterweight title. It also serve as the finals of the Bellator welterweight grand prix. The fight is a rematch, as MacDonald previously defeated Lima to win the belt in the first place in January 2018.

We already knew that Lima and MacDonald would be fighting for the title, and now we have a date. The two made it to the finals of the welterweight grand prix, with Lima defeating Michael “Venom” Page and Andrey Koreshkov by stoppage. MacDonald, meanwhile, had a draw with Jon Fitch and advanced due to the champion’s clause, where he defeated Neiman Gracie in the next round to make it to the finals.

As for Mir and Nelson, the veteran heavyweights are both on a decline in their career. Mir is now 40 and he is on a four-fight losing skid that includes TKO losses to Fedor Emelianenko and Javy Ayala under the Bellator banner. As for Nelson, he is 43 and is on a three-fight losing skid himself. Nelson is just 1-3 overall since coming over to Bellator.

Are you excited for the Rory MacDonald vs. Douglas Lima rematch and/or the Roy Nelson vs. Frank Mir rematch?