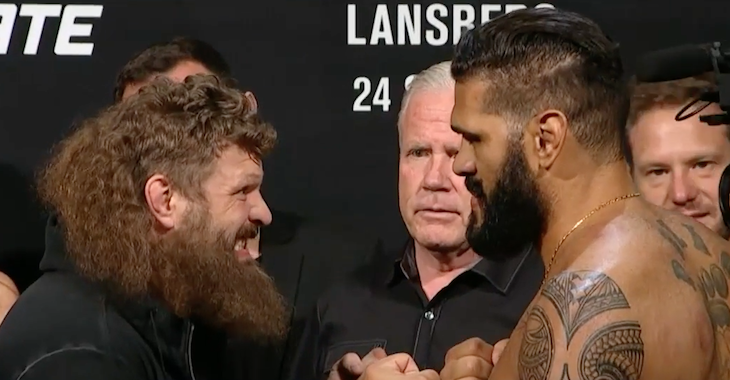 Round two begins and Silva lands a leg kick but Roy counters with a huge right hand. Silva takes the shot and lands another kick. Nelson misses with an overhand right. Silva charges forward and misses with a body kick. Roy walks Silva down and misses with a right hand. Silva fires back and lands a left. Roy lands a right hand. Silva returns fire with a body kick. Silva lands a kick low that forces the referee to step in and let Roy recover. We restart and Silva rushes forward and presses Roy against the cage. Both men trade knees inside. They break and Roy charges forward with a combination but only one of three punches land. Roy comes forward again and lands a left. Silva returns fire with a leg kick. A big uppercut lands for Nelson. Silva lands a leg kick in reply. Another big right hand connects for Nelson. Silva returns fire with a left. A big uppercut lands for Roy and drops Silva. He follows up with some ground and pound and this one is over!