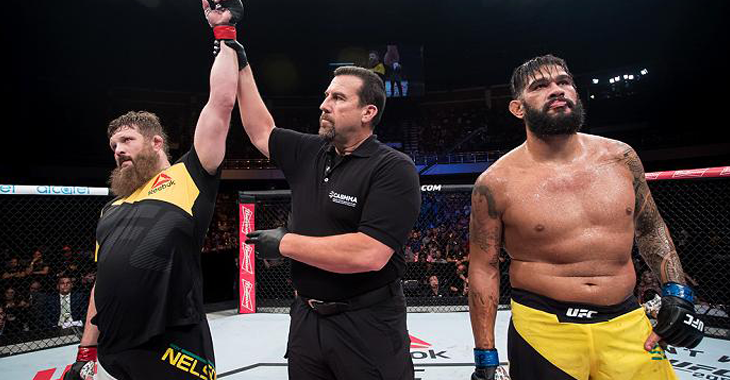 Former UFC lightweight champion Benson Henderson has had his own issues with referee ‘Big’ John McCarthy, but ‘Smooth’ says he would never have considered kicking him, as Roy ‘Big Country’ Nelson did on Saturday.

Following a crushing uppercut that sent opponent ‘Bigfoot’ Silva crashing to the mat, Nelson finished the fight with some ground-and-pound, causing what ‘Big Country’ believed to be a very late stoppage against a personal friend.

A kick to ‘Big’ John’s backside followed from Nelson, and Bendo revealed his thoughts on the controversial kick that had the whole MMA world talking.

“I would just say that no matter what a referee does, you can’t disrespect him like that. There are times we don’t agree with referees. Trust me, I’ve even been upset with John McCarthy in one of my previous fights. But there’s nothing a referee can do that makes it OK for you to put your foot on his butt. In the NFL or NBA, you touch an official the wrong way, the repercussions are harsh,” Henderson told ESPN’s Five Rounds. “

“I think for this to be a legitimate sport, we have to be the same way.” This isn’t the first time Nelson has found himself on the opposite side of the UFC brass. While UFC President Dana White stated several years ago that “I try so hard to like Roy Nelson,” the pair are often at odds. Back in 2014, White roasted Nelson after it was revealed that ‘Big Country’ applied for the position of Executive Director of the NSAC.

Henderson himself has had issues with referees in the past. Perhaps most notably was Bendo’s insistence of using of a toothpick while fighting, which MMA referees often frowned upon.

While Benson’s use of a toothpick mid-fight was somewhat controversial, at least Dana White didn’t say he needed “to be buried“, as the UFC president said about Roy Nelson.

How did you feel about the post-fight kick? Should ‘Big Country’ be fined or punished for it? Sound off, PENN Nation!